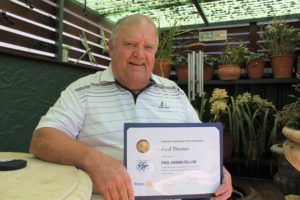 When Paul Thomas returned to Parkes in 1980 as a Vietnam veteran after six years in the army, he teed up his involvement with the Parkes Golf Club committee. “It gave me something to do,” said the man who had become known as Mister Golf after 37 years of involvement. He had become such an institution when he announced his intention to retire, nobody wanted to believe him.

As a ‘free’ man who can now focus on his handicap, he also has time to reflect on a lifetime of working for the betterment of the Parkes Golf Club. “That is all I ever wanted to do.”

He rates turning the Parkes Open into a premier country golfing event as one of his achievements. “Over the 30 years of my involvement we did not change the format, but upgraded it fractionally to attract one of the strongest fields for any country event in NSW.”

Paul gives a lot of credit to Ray White who was “a very good administrator” and his greatest influence. I followed him in most of his positions from captain, to president of Lachlan Valley to Golf NSW.”

He looks fondly back at his involvement with junior golf. “The highlight was in 1986 when we filled up a bus with kids who had qualified for the Jack Newton International in Cessnock, with Greg Lawson from Parkes winning it.”

The biggest highlight this year left him completely gobsmacked when Rotary awarded him a Paul Harris Fellowship for helping out with the Rotary golf day for ten years. “As a non-member of Rotary, it is an honour I am very grateful for.”

Over Paul’s 37-year involvement he has seen a big change in society with people now working seven days a week and businesses staying open longer. “Shops used to close lunch time on Saturdays and then everyone did sport.” He said the club’s membership has decreased because of this change in lifestyle.

Paul’s retirement does not mean a new routine for him as he still serves at the Lachlan Valley president, and he is secretary of the RSL Sub-branch with lots of projects to work on. Parkes better watch out his next title might just be Mister RSL.