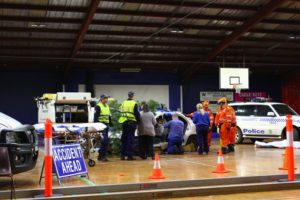 Over 500 year 10 students from the Parkes, Forbes and Lachlan Shire Council areas were invited to attend the annual Mock Crash at Parkes PCYC yesterday. The event began with a short film showing the moments leading up to an accident; a car full of teens driving home the morning after a party, the driver misjudged a bend and hit a tree.

The curtains then pulled back to reveal the car wreck, and the students watched as live actors dealt with the aftermath. The driver was the least hurt, and was able to call 000. Ambulance, police and rescue services arrived on the scene. There was one fatality and the surviving passengers suffered life-changing injuries. Video testimonials detailed the impact the accident has had on the survivors, their families and the emergency response crew.

The demonstration offers students a realistic insight into the consequences of a car crash, highlighting both the immediate outcomes and the long-term repercussions. It’s an emotional experience, giving students a unique opportunity to witness a full emergency response. Parkes, Forbes and Lachlan Shire Councils’ Road Safety and Injury Prevention Officer, Logan Dolbel, said the program aimed to improve the attitudes and behaviours of young drivers who were tragically over-represented in road accidents across the state. The Mock Crash is also teamed with a series of pre-lessons as part of the Not A Statistic Youth Driver Education Program. Now in its seventh year, the program has been making an impact since 2009.