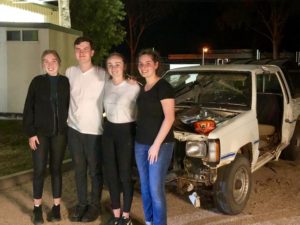 Plans are well underway for this year’s NOT A STATISTIC! Youth Driver Education Program, with the youth actors for the mock car crash demonstration selected, dates set for filming the establishing videos and the rehearsal schedule locked in.

“There was a lot of interest in the auditions this year – we had the largest turn-out of youth actors yet. Most had been to mock crash last year and wanted to be involved, especially as this year we are celebrating our 10th anniversary,” said Parkes, Forbes and Lachlan Shire Councils’ Road Safety and Injury Prevention Officer, Melanie Suitor.

“Casting was very difficult – everyone was so talented. Whilst there are only four roles available for the mock crash demonstration, we offered the other actors roles in the establishing scenes.” “Our youth actors have already been put
through their paces, attending Road Crash Rescue Training with the Parkes State Emergency Services, to see how they cope being cut from a car and carried on a casualty board.”

“Work now turns towards the table reads and getting ready to film the establishing scenes and victim impact statements.” “Once filming is completed, there will be briefings from NSW Ambulance about injuries, a table read to get a feel for the script and ab-lib opportunities, with rehearsals kicking off in July,” Ms Suitor said.

“During the 10 years that this program has been running we have recorded a 27% decrease in crashes on local roads involving a young driver (17 – 25 years old),” Ms Suitor said.

The mock car crash demonstration is scheduled for Friday 17th August 2018. More than 500 Year 10 students from across the Parkes, Forbes and Lachlan Shire Councils will be attending. The final dress rehearsal on Monday 20th August will be open to the public.