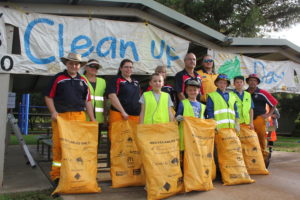 A small number of volunteers collected a huge load of rubbish around Parkes on Clean Up Australia Day last Sunday.

The Rural Fire Service (RFS) put in a fan- tastic effort making up almost half of the 28 volunteers who turned up on the day. Another two stalwarts, Bev and Bob Bokeyar, continued their traditions of more than 20 years of cleaning up.

According to organiser Michelle Bicket, the RFS once again cleaned the Orange road towards the airport filling two trailers with rubbish. This is a lot, considering they cleaned the same road last year when they collected even more. Other areas cleaned were the Forbes road where 18 bags of rubbish were picked up and seven bags at the northern truck stop.

In the mean time the deadline to implement the biggest initiative to tackle litter in NSW has been extended to 1st December. The container deposit scheme (CDS) will give people in NSW a 10-cent refund when they return empty beverage containers between 150ml and three litres to collection points. This will give people a financial incentive to do the right thing and recycle drink containers to significantly reduce the 160 million drink containers littered every year.

Beverage containers made up 49 per cent of litter by volume according to the 2015- 2016 National Litter Index. The CDS will catch 43 per cent of this.

As for Clean Up Australia Day volunteers, over the last 26 years they have picked up more than 331,000 tonnes of rubbish. That’s the equivalent of end-to-end fully laden utes from Sydney to Brisbane via the coastline.