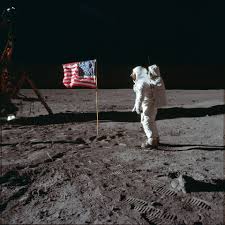 As the 50th anniversary of the Apollo 11 Moon landing approaches on 21 July, CSIRO and the National Film and Sound Archive of Australia have ensured the original TV broadcast will be preserved for future generations.

NASA gifted the only official copy of the footage held outside of the United States to CSIRO, Australia’s national science agency, in recognition of Australia’s crucial role supporting the Apollo 11 mission.

Ground stations in Australia played an essential role in the success of the Apollo 11 mission, receiving and relaying images to the world, tracking spacecraft and monitoring  astronauts’ health.

Sharing this historic event, which was seen by over 600 million people around the world, would not have been possible without this strong US and Australia partnership.

Communicating with the Apollo 11 lunar module Eagle and sharing news of the ‘giant leap’ was made possible by the technology and teams at NASA’s tracking stations at Goldstone, California and Honeysuckle Creek near Canberra, and CSIRO’s Parkes radio telescope in NSW.

NASA switched from Goldstone to Honeysuckle Creek for the first nine minutes of the broadcast, before transferring to the stronger signal being received by CSIRO’s Parkes radio telescope, which was then used to share the remainder of the twoand- a-half-hour broadcast with the world.

Executive Director of CSIRO’s space programs, Dr Dave Williams said Australia’s unique geographical location made it a natural choice for NASA to establish ground tracking stations, which need to be located at equal distances around the world to maintain constant contact with spacecraft.

“Today we’re delighted to accept this donation from CSIRO to add to our collection, which preserves key moments in Australia’s history,” said Jan Muller, CEO of the National Film and Sound Archive.

Vision of the moonwalk was transmitted via a 66cm radio dish on top of the lunar module that used just 20 watts of power – the same energy output as two LED light bulbs. The faint signals then travelled 384,000 kilometres to Earth where they were received and converted to a signal normal televisions could receive.

“It was an honour to receive the official copy of the footage from NASA and to donate it to the National Film and Sound Archive for the benefit of future generations,” said Dr Dave Williams.

The Central West Astronomical Society (CWAS) is proud to announce the shortlisted finalists in the 2019 CWAS Astrophotography Awards – the ‘David Malin Awards’. The winners will be announced and presented with their awards during the 2019 CWAS AstroFest, which will be held in conjunction with the CSIRO Parkes Observatory’s Apollo 11 Open Days, from 20-21 July 2019.

This year’s competition had eight categories: Deep Sky, Wide-Field, Solar System, Nightscapes, Animated Sequences (Scientific and Aesthetic), Themed Section – “Memories of Apollo”, and a Junior section (18 years old or younger). The entries were judged by world-renowned astrophotographer, Dr David Malin, who was unaware of the identity of the photographers.

“This year’s pictures are the best I’ve seen in the 15 years of the competition. I was very impressed by the technical and aesthetic qualities of the images we received”, said Dr David Malin. To view the shortlisted finalists, visit http://www.cwas.org.au/

It was not just technical skill that was assessed – prizes are awarded to pictures that are technically excellent and capture the beauty of the sky and the intrinsic interest of astronomy in an aesthetically pleasing manner. The winners will be presented tonight, Friday 19 July, at the CSIRO Parkes Observatory’s Visitors Centre.

Canon Australia is supporting the competition with Estore Voucher prizes to the value of over $10,000. “Canon is proud to continue to be involved with the CWAS AstroFest,” said Kate Guaran, General Manager, Consumer & Product Marketing – Canon Australia. “It enables us to celebrate the people who truly capture the beauty of what is possible.”

The associated exhibition will be on show at the CSIRO Parkes Observatory’s Visitors Centre for 12 months. For more information about the ‘David Malin Awards’ and the 2019 CWAS AstroFest, visit http://www.cwas.org.au/astrofest/.