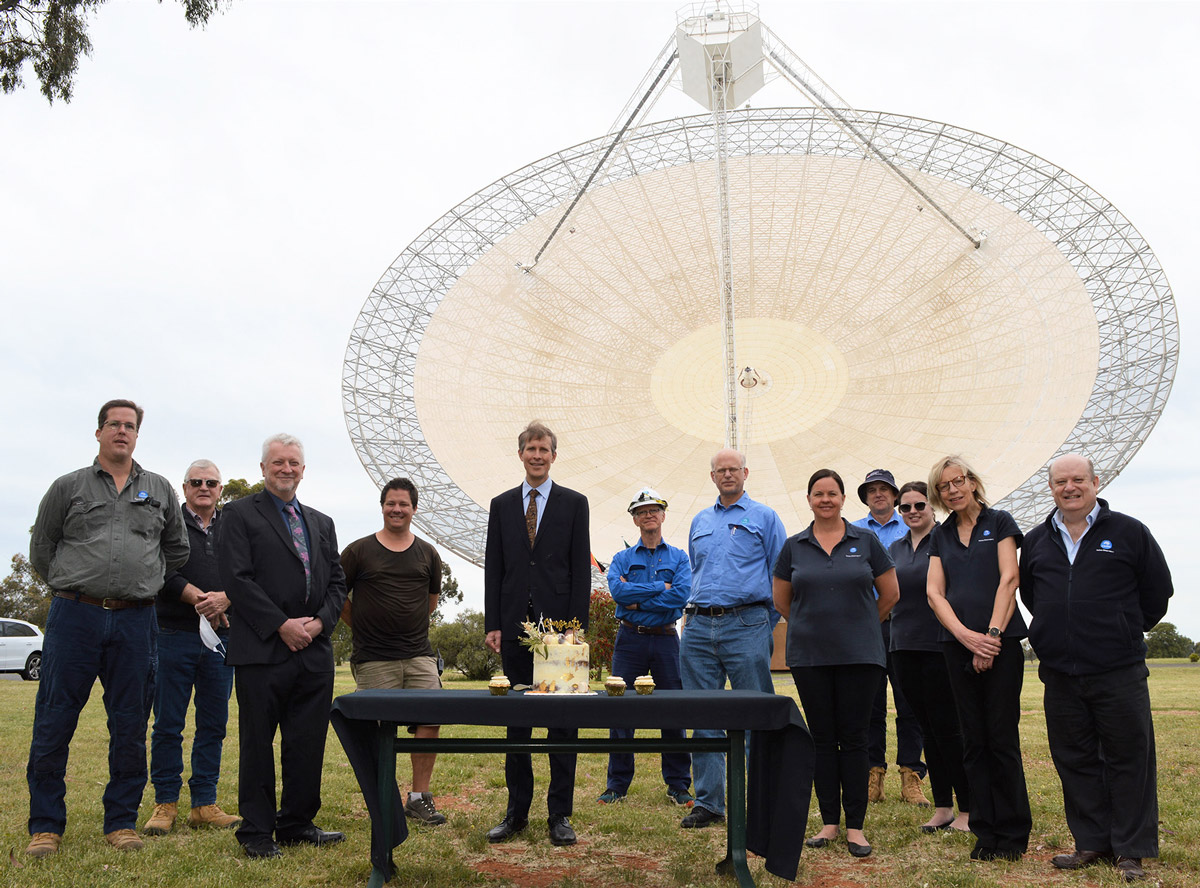 The CSIRO staff at the Parkes Radio Telescope shared in the special anniversary cake made by Kylie Jones for Monday’s celebrations.

It’s a pretty familiar story for most residents of the Parkes Shire and further afield thanks to the movie, but the role The Dish played in the moon landing is not the only distinguished achievement of the finest single-dish radio telescope in the world.

The CSIRO’s 64-metre Parkes Radio Telescope was commissioned on 31 October 1961, and after 60 years of operation, it has been recognised as the most successful scientific instrument ever built in Australia.

“Who could dispute that over six decades it has racked up an astounding list of discoveries and achievements,” said Dr John Reynolds, head of operations CSIRO radio telescopes, at the official celebration on Monday.

“And it continues to thrive thanks to innovation, new technology and the boundless scientific curiosity of our astronomers, engineers and students.”

Early next year the Parkes Telescope will again be involved in serious space exploration by supporting new missions to the moon as part of NASA’s Artemis program that will put the first woman and first person of colour on the moon.

Last year the telescope became the only working scientific instrument to receive a heritage listing, and this achievement was also celebrated on Monday.

“The most famous dish in the nation will now be preserved and protected for future generations after being awarded national heritage status,” said Douglas Dr Bock, CSIRO Director of Space and Astronomy. He said it was an unusual listing as the telescope was old enough to qualify for the national heritage list, but remained young enough to continue to observe the universe 24 hours a day, seven days a week with the most advanced radio receivers in the world.

Traditionally such a milestone anniversary would have been celebrated with a conference, but under current COVID regulations people who have used this wonderful instrument from around the globe were asked to share some of their experiences by video.

Operations Scientist at the telescope John Sarkissian, who clocked 25 years of service with the CSIRO last week, said he was four months old in December 1962, “and 56 years later in this very room my colleagues and I tracked Voyager II as it crossed into interstellar space. It’s amazing to realise that in a space of a single human life time the initial space exploration of the entire solar system was completed and Parkes was there from the start!”

The last video played features an interesting interview with Rob Sitch, director of the movie The Dish. He said before the movie was made Australia’s involvement in the Apollo 11 moon landing had been for-gotten by 99.99% of Australians.

The proceedings on Monday, including cutting a beautiful cake, and the videos were live streamed and can still be seen on the website at Parkes Telescope 60th Anniversary | Australia Telescope National Facility (csiro.au)