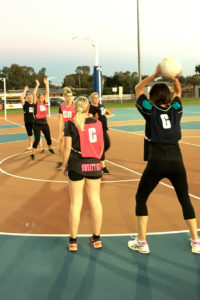 Junior Netball Friday 30th March What a beautiful morning for the start of our Junior netball competition. With some great games played and lots of smiles.

Reminder that there are no games to be played during the holidays, Parkes Netball Association would like to wish all their players and their families a wonderful break and see you all back on Saturday 5th May for Round 2.

We are still shuffling a few teams around, so keep an eye on Facebook during the holidays. Draws will also be published in the next few weeks.

Ladies Netball Tuesday 17th April
Great work to all our teams fulfilling umpiring duties each week. We now break for the school holidays and Parkes Netball would like to wish all our players and their families safe and happy holidays. We will return to
netball on Tuesday 1st May.