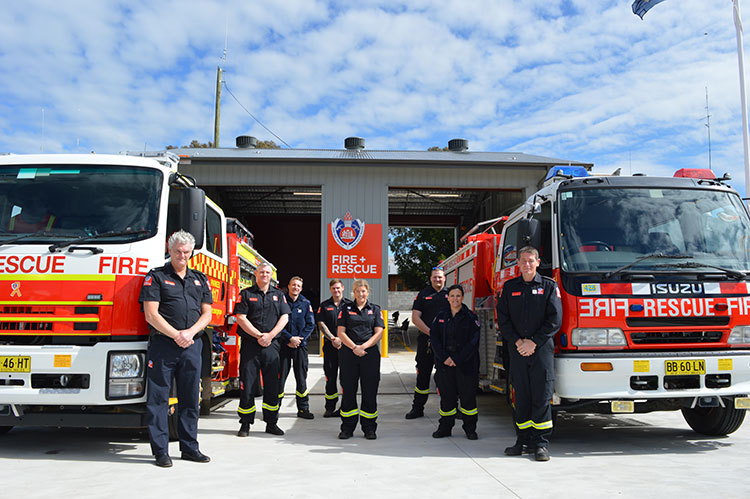 STATION 417… Members of the Fire & Rescue staff at the new Parkes Fire Station are keen to welcome the public to have a look once COVID restrictions have eased.

Two months after its completion, the brand new $2.05 million Parkes Fire Station was officially opened with a COVID-safe ceremony on Tuesday.

“I am delighted to open this significant investment in the Parkes community that will see the local response to fires and other emergencies improve,” said NSW Minister for Police and Emergency Services David Elliott.

The new facility in Hill Street is the third fire station for Parkes and replaces the old station, which had been in use for 100 years. Fire & Rescue NSW (FRNSW) Commissioner Paul Baxter said he was delighted to have seen the project from start to finish.

The new station features a twin fire engine bay, allowing the station to expand its fleet to two Class 2 appliances (one pump and one SEV Pump). Along with a training and lecture room area, the new station also features a separate station commander office, locker rooms and toilet facilities, as well as a new gym to help keep staff prepared for the physical nature of their work.

“It is definitely a step up from the old station,” said firefighter Tom Rinck, who had been with the Parkes Station 417 for about 18 months.

Parkes Station Commander Captain Craig Gibson touched on some of the big fires in the history of Parkes, including the Mobil Depot Fire on 23rd May 1983. A memorial has been erected in the garden of the new fire station in honour of the bravery of the firefighters on that day, and a special commemoration is planned for May next year.