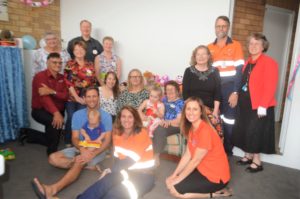 The Parkes Red Cross branch has come to the rescue of parents and carers with a new and much needed initiative.
The Red Cross officially opened its brand new parents/carers room at its Church Street premises on Wednesday offering a safe and welcoming environment for changing nappies, feeding or just some quiet from the business outside.

The room is the idea of committee member Alison Dixon and the very first of its kind among Red Cross branches. “It is a fantastic idea and great for the community and families,” said Megan Norton, Senior Administration Officer of the greater western region who had come from Wagga for the opening.

President Norma Oliver said the idea would not have become a reality without the help and donations of the community. They were able to convert a junk room into the beautiful facility with a basin with hot water, a fridge, couch, carpeted floor, toys, nappies and other items. There is also an outside play area.

“It is amazing to see this facility and that the money was used to benefit locals,” said Michelle Wetherell from Northparkes Mines. “As a mother of a three-year-old I know how much this will mean to parents.” Councillor Pat Smith said it’s been needed for a long time. “It is just amazing and great that the Red Cross has done this for our community.”

The room will be open on Wednesdays and Thursdays from 10am to 3pm and on Fridays from 9am to 3pm. “We would love to have it open every day, but do not have enough volunteers at the moment for that,” said Secretary Allison Woods.