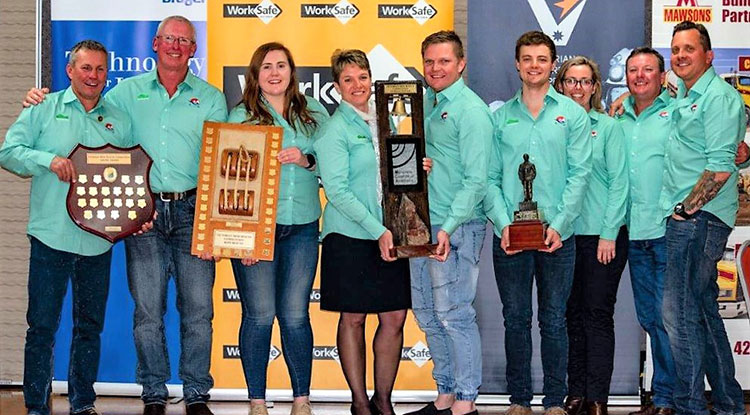 The Emergency Response Team (ERT) of Northparkes Mines has won a prestigious national mine rescue competition for the fourth time.

Northparkes ERT won the 2019 Victorian Mine Rescue Competition last weekend at the Yallourn Mine in the Latrobe Valley of Victoria. They competed against eight teams from Victoria and NSW in a display of world-leading expertise of Australia’s mining industry at the 27th annual staging of the event.

The teams competed in a range of events including team skills, firefighting, first aid, rope rescue and search and rescue.

The competition featured a variety of simulated emergency situations where teams put their skills to the test.

The Northparkes team placed first in breathing apparatus, first in theory, first in rope rescue, third in first aid, third in the captain’s assessment and third in search and rescue.

“Congratulations to the competition team and the entire group of ERT members who train year-round to ensure they are ready to assist in case of an emergency. We are enormously proud of each and every one of you,” said Northparkes Managing Director, Hubert Lehman.

Another highlight was Northparkes ERT member Travis Carte winning the overall theory component. “We have sent members of our ERT to compete for the past 24 years and were named the overall winner in 2009, 2014 and 2015. Our consist- ent success at this competition reflects the hard work of our ERT members to stay at the leading edge of emergency response practices,” said Hubert.

“Zero Harm is our approach to every aspect of our operations and our ability to respond to emergency scenarios is a critical part of this. Competitions such as this allow us to practise our skills and benchmark ourselves against others in the industry,” said Northparkes Manager People, Safety & Environment, Stacey Kelly.