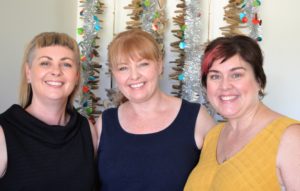 Almost eight years ago three Parkes girls came together to form a local, home-grown group called Amitie that has since grown into a class act. Shevaun Brown, Christa Radley and Christie Green met on stage as The Pink Ladies in the Parkes Musical & Dramatic (M & D) Society’s 2010 production of Grease.

They discovered an amazing harmony – not only of their voices, but of friendship too. “They’re the sisters I got to pick myself,” said Christie. “The name Amitie, meaning ‘friendship’ chosen by Shev echoes the closeness of the three.”

In 2011 the girl-band emerged with the sounds, looks and vibes of the Swinging Sixties after their hit in the M & D’s musical Downtown.

They have gone on to perform on cruise ships and at festivals, and fondly remember a ‘Rock the Boat’ cruise in 2016 playing alongside the likes of The Fortunes, The Searchers and The Troggs. “Eddy from The Fortunes came and watched all our gigs and told us how amazing we were!” Shev recalls.

Another favourite performance was last May’s ABBA Festival performing on a professional stage in front of an amazing large crowd brought to their feet by Amitie’s enthusiastic talent.

Despite all their success, they remain totally unaffected. “We just have fun,” said Christa. “When people say how good we are, or how professional we sound, we just laugh.” “It’s nice to get the recognition,” said Christie. “We’ve often heard: ‘You girls just don’t get how good you are’, but we just sing for the love of it. I do feel a sense of pride when I hear our recordings, but really, we’re just the singing housewives.”

And that’s exactly who Amitie wants to remain. Over time the trio have fallen into sync so well, and instead of getting on each other’s nerves they’ve become more tolerant of each other.

But do things ever go wrong? “Oh always!” They’ve experienced loss of voices, loss of vocal range, speakers blowing up, not being able to stand still on rocking boats, costume malfunctions… “We always forget the words or the moves.
We look out the corner of our eye and see one of the others smiling and we know something’s wrong,” said Shev, “but we don’t even blink.”

Looking to the future they don’t want to change what they’ve got. “It’s not work, it’s fun.” A booking for the odd cruise or festival would be good, but lucky for Parkes, they hope to be around for a long time to come.

“They’ll have to stop calling us ‘the girls’”, said Shev, “we’ll be grandmothers by then.” “And when we’re in our eighties in the nursing home,” said Christa, “we’ll probably be getting on stage and entertaining the other residents.”

(Amitie has 10 performances at the Parkes Elvis Festival on the Cooke Parke main stage and Memphis stage, as well as the Jack Gatto concerts and Miss Priscilla Dinner.)