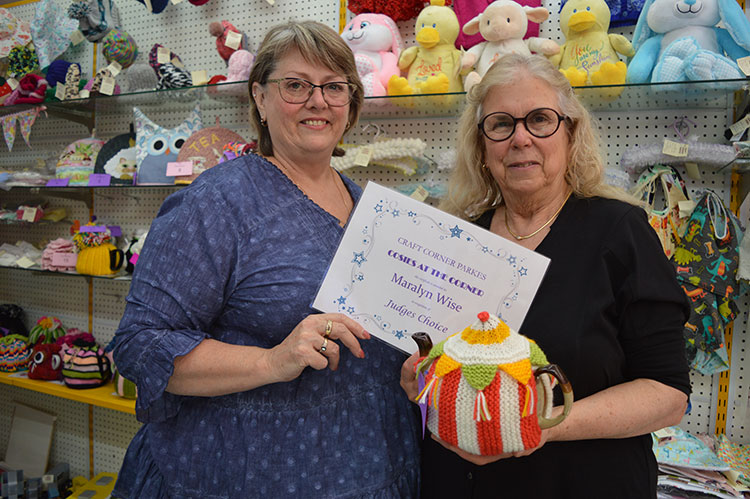 Alison Evans of the Craft Corner hands over the Judges Choice award to Maralyn Wise from Forbes in the biennial tea cosy competition of the Parkes Craft Corner.

Two years after its highly successful inaugural tea cosy competition, the Craft Corner in Parkes has again brought this celebrated relic back to life!

“The quality is just amazing and the talent the entrants displayed with their skills to crochet, knit and sew is just fantastic,” said Alison Evans of the organising committee.

Last Friday the 43 entries from all over the State were put on display for the announcement of the winners. Judges Kelly McGirr and Elsie Mahon carefully considered all the entries and picked the winners.

Maralyn Wise from Forbes won the Judges Choice award. She also received a highly commended for her entry in the Weird and Wacky category.

Maralyn was overjoyed with her prize saying it was the first time she had ever won something for her knitting as quilting and patchwork were actually her forte.

Joanne Veronese was first in the Floral Splendour category, and achieved highly commended in the Treasured Memories category.

Voting for the People’s Choice winner will take place until 21st October.