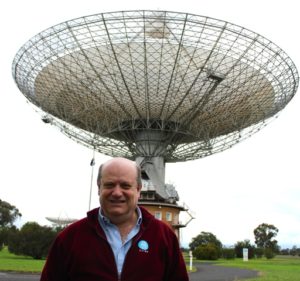 A picture of the Parkes Radio Telescope on the cover of his maths textbook in Year 9 often had John Sarkissian daydreaming in class of working there one day. “At age six I was fascinated with Neil Armstrong’s landing on the moon, and by age ten I wanted to do astronomy.”

One thing John, who is today Operations Scientist at the Parkes Radio Telescope, never gave any thought to was being awarded an Order of Australia Medal (OAM). “It came as a complete surprise!” So much so that when he received the email to inform him he was recognised in the Queen’s Birthday Honours list, he immediately thought it was a prank.

“I had to give it time to sink in and after a few days I felt it was an honour and would be very happy to accept it” he said. John feels strongly that he cannot lay claim to this honour in isolation but recognises the contribution of friends and colleagues over the years to his work.

For John his work is his passion and joining the Parkes Radio Telescope in 1996 was a highlight. “The telescope was the first really big science project in Australia. We have made big discoveries here, and 55 years later it is still considered to be one of the best radio telescopes in the world.” Another highlight for John was the making of the movie The Dish. “Originally we thought they were coming to make a documentary, but soon realised it was going to be a movie, in fact a comedy.” John feels the movie managed to reintroduce the Parkes Radio Telescope to a new generation and made The Dish the iconic symbol it has become. He said before the movie visitor numbers were 50,000 per year. After the movie it reached a peak of 130,000 in 2003, and has averaged out to 100,000 per year.

“It has given us a platform to stand on and talk about what we do.” While the movie has focused on the moon landing, and “so many of us have dreamed about being an astronaut”, John said he soon realised that problem solving behind the scenes was much more rewarding. “It is like a hunter and his prey. Once you have caught your prey (solved a problem), it is a really good feeling.” John has met many astronauts, including his childhood hero, Neil Armstrong. He said Neil stood out from the rest. A prize possession of John is a framed copy of an email from Neil in recognition of his work to recover the tapes of the Apollo 11 mission. For the Year 5 student who had to search the library to find out what NASA stood for, and today has an office with a beautiful view of the Parkes Radio Telescope, his dream for the future is to keep the telescope going and use it as a productive instrument as “you never know what you might find”.