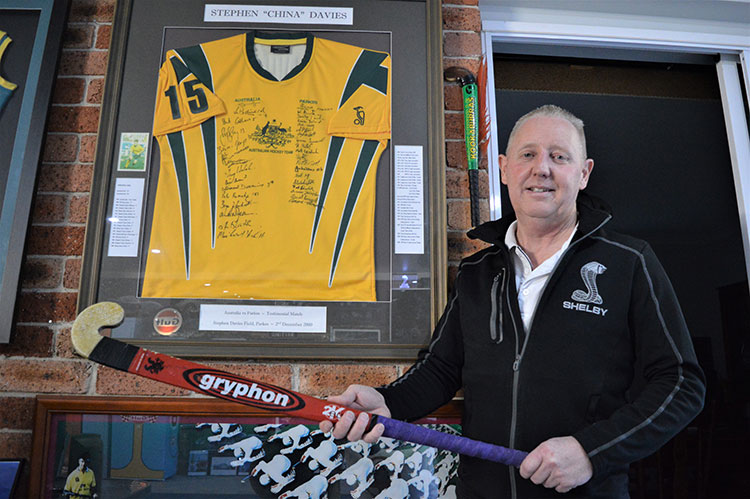 Dusty Powter holds the stick that Stephen scored the goal with in the Olympic match that won them the bronze medal. Behind him is Stephen’s framed Australian jersey from his testimonial match played in Parkes signed by the Australian and Parkes teams that was sold on auction.

“It was a time when emotions went off the chart,” is Dusty Powter’s recollection of not only attending the 2000 Sydney Olympics, but also the build-up of events in Parkes.

“I will never forget Australian hockey player Stephen Davies leading the procession in the chariot for the Olympic torch relay in Parkes and the carnival at Pioneer Oval. Before that was the filming of the IBM ad, which gave Parkes the best ever advertising all over world. I had family and friends calling from England and Germany who had seen it.”

For Dusty to see his life long friend he had grown up with in Parkes play for Australia in the Olympics was just unreal.

“I had tickets for every hockey game for the men and women and was there for two weeks. Every time Stephen ran on the field, scored a goal or a clip of him was shown on the big screens, tears were running. I was so proud of him, and none of it ever went to his head.”

According to Dusty, an avid hockey player himself and former coach and sponsor of Mariah Williams and sponsor for Kurt Lovett, the Olympics is the pinnacle for hockey. For Stephen to have retired with three Olympic medals (two silver and a bronze from Sydney) is just fantastic.

“It was a big deal for Parkes hockey the day Stephen made it on the national team. He really was the Maradona of hockey. He was just a freak. And the amazing thing is he never forgot where he came from.”

Dusty clearly remembers how friendly and helpful everyone was in Sydney.

“There was such a carnival atmosphere and so many Parkes people with banners in support of Stephen. It was just an awesome and phenomenal time!”