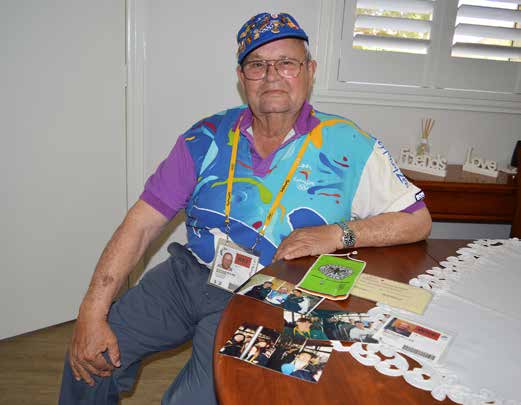 Mal Westcott wearing his Sydney Olympics shirt he had to wear as a bus driver, his accreditation around his neck and his cap with lots of different pins given to him by athletes.

While many Parkes residents attended the 2000 Sydney Olympics as spectators, Mal Westcott went there to work and came home with very memorable experiences.

He not only ended up with a bronze Olympic medal around his neck, but also had a long conversation with an elite athlete he picked up from the airport.

Mal was one of about eight bus drivers from Parkes who were recruited by Peter Harris to go with his buses to Sydney. He was the only one who went for six weeks, and that meant he was there two weeks before the Games started.

“I was fortunate to be chosen to transport athletes and that involved picking them up from the airport as they arrived before the start of the event.”

Mal said the main highlight of his six weeks came when he was waiting in the common room at the airport to be called out. When his turn came, he only had three passengers: Roger Federer and his chiro, plus an archer from somewhere in Europe.

He took the three in his 50-seater bus with Roger sitting in the front seat chatting to him all the way to the athlete’s village. “He’s been my hero ever since! I’ve been following his tennis career very closely.”

The other highlight for Mal was his association with the German women’s soccer team. He first picked them up for a training session, and they asked if he could be their driver again for their match against Norway.

“They were the favourites for the gold medal, and were not too concerned about playing Norway.”

“They asked me to tell them when we were 25 minutes from the Sydney Football Stadium at Moore Park so they can start listening to their motivational tapes.”

The Germans had a horror match scoring an own goal and loosing.

They ended up playing for the bronze medal and again asked Mal to pick them up. The only event Mal ever saw of the Olympics was the medal ceremony with Germany getting the bronze.

“They were very happy and did not want to go home. They asked me to take them to the ‘German House’ where they wanted to celebrate. They included me in the celebrations and put one of the medals around my neck. That felt pretty special to have a bronze Olympic medal on.”

Although the six weeks away from home became very long, and the days of ten or more hours of work very tiring, Mal said he really enjoyed his interaction with the athletes. He remembers picking up the Australian basketball team, which was also a special highlight.

“I am very happy I did it. It was an eye opener in many ways. It was such a big event and so much involved logistically just in organising transport, let alone everything else. It was really well organised. We did see some overkill, but that is probably why it was so successful.”