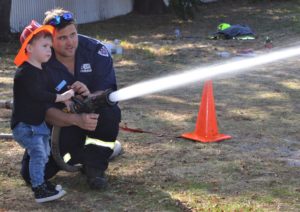 Close to 400 little faces lit up with amazement, excitement and wonder as local fire fighters put their skills on display at the annual open day of Fire & Rescue NSW in Parkes last Saturday.

The station came alive as some of the 18 retained fire fighters in Parkes demonstrated fire safety in the kitchen and how to cut open a wreck, while the kids could hold a fire hose blasting out a stream of water, climb into a fire truck, colour in or get face paint.

Organiser Simon King said they were taken by surprise with the turnout which had doubled from previous years with approximately 600 people attending.

“There is a lot of interest in the new fire station to be built.” The NSW Government announced in March a state-of-the-art fire station will be built on the block just behind the current station. Simon emphasised the main focus of the
day was to highlight fire safety in the home. Craig Buckle and Nicole Varcoe demonstrated how easy a fire could start in the kitchen when you are not “looking when you’re cooking”. When a pan on the stove starts burning, the most important thing to remember is to not try and put it out with water, but to smother it with a fire blanket. Simon said all home fire safety equipment were available at hardware stores, and he encouraged home owners to acquire fire blankets and fire extinguishers, and install and maintain smoke alarms.

The Parkes Fire Station receives between 250 and 300 calls per year, including rescue incidents, of which 60% are late at night. Fire & Rescue NSW fire fighters are trained to handle and assist with chemical spills, car accidents and natural disasters to prevention, education and humanitarian relief.

According to Simon fire fighters are “prepared for anything and ready to help anyone, anywhere and at any time”.