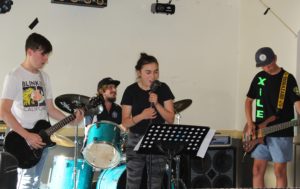 Local talent got to strut their stuff on stage at the Cambridge Hotel last Saturday during the December CHILL ZONE, a monthly open mic event that’s becoming the place to be for Parkes performers. Batty, the owner of Batty’s Music, got the ball rolling on CHILL ZONE in September, and says it’s just getting bigger and better. “There’s not enough opportunities for the youth to get experience playing live,” he said. “Some of our performers have now got paid gigs, so it’s great to see how this kind of opportunity really makes a difference.”

The CHILL ZONE generally runs from 2 to 7pm on the first Saturday of the month, although it may be rescheduled to accommodate other community events. Performers register with Batty on the day and are given a slot in the rotating lineup. The open mic session draws in a lot of local talent, but also attracts creatives from further afield. People have come from Forbes, Dubbo, Condoblin, Eugowra, and even as far as Bathurst.

Birdee Sideris has been going to CHILL ZONE since it started. “It’s a great environment, really encouraging and supportive,” she said. “Even if you’re shy and don’t like performing in front of people, it’s wonderful, supportive atmosphere.” Record producer and sound engineer Stephan Van Der Merwe works with Batty to make CHILL ZONE happen. “It’s good for the kids,” he said. “But it’s not just for musos – it’s really an open mic event. We have had ventriloquists, stand-up comedians, poets… you don’t have to be in a band. It’s just a chance for creative people
to get their stuff out there.”

While most pub music events are for adult audiences, CHILL ZONE is an allages occasion. Anyone of any age can
take the stage, plus it makes a great family outing, where kids can tag along to enjoy the show.