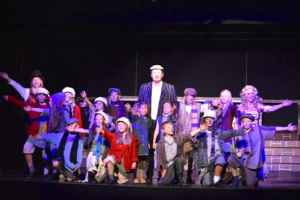 It’s the latest extravaganza to be brought to the Little Theatre by the Parkes M&D Society. The family-friendly stage production is jam-packed with musical numbers and special effects set to make it the talk of the town.

Chitty Chitty Bang Bang is a raucous ad- venture about a magical car; packed with hijinks, histrionics and hilarity. It follows the Potts’ family escapades after eccentric in- ventor Caractacus Potts and his children Jeremy and Jemima discover that the old racing car he restored can fly. The evil Baron Bomburst hatches a plan to steal the car, but accidentally kidnaps Grandpa Potts. When the Potts family stage a res- cue, they find themselves at the mercy of the child catcher, so Caractacus enlists the help of new friends – and Chitty – to out- wit the dastardly Baron and save Jeremy, Jemima and Grandpa.

The all-ages production not only shares the joy of theatre with younger audiences, but gives talented young actors the opportunity to take to the stage. There are more than thirty juniors and teens in the ensemble cast, an impressive turnout that shows there is a strong local demand for artistic pursuits.

Like most stage productions, the chil- dren’s lead roles are played by an alter- nate cast. Jeremy and Jemima are played by M&D veteran performers Tom Buesnell (13) and Maia Hennock (12) for some shows, and talented newcomers Beau Shearer (9) and Anabelle van Wyk (9) for alternate shows.

The multi-talented Neil Westcott is wear- ing two hats for the production; he is di- recting the show along with fellow thespi- an Lyn Townsend, and is also treading the boards as Caractacus Potts.

But theatre isn’t produced by actors alone. A dedicated crew and talented band have been working tirelessly to create a dazzling spectacle that everyone will love.