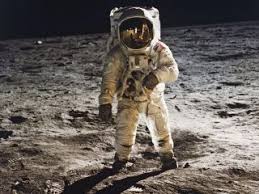 The Parkes Railway Hotel helped to kick off a weekend of 50th anniversary celebrations of the Apollo 11 moon landing last Friday with astronomical talks in the Hart Bar.

A crowd of more than 100 people turned up for a night of fascinating talks by three astronomers. “It was a wonderful and informative event,” said organiser Kasie Ferguson, “and a great way to start off the amazing weekend in Parkes.”

Dr Phil Edwards put the events of Parkes Telescope into context with interesting world events and the international music scene over the past 60 years and discussed the Dish’s massive role in the forefront of astronomy for the past 60 years, from understanding of pulsars to searching for extra-terrestrial life.

Dr Karen Lee-Waddell captivated the audience with tales of dancing galaxies. Each galaxy has a unique life story and Karen looks back in time to see how they evolved. They move together in swirling patterns until, over billions of years, they merge together becoming larger and larger galaxies.

Parkes resident Dr Jane Kaczmarek of the Parkes Radio Telescope led the popular question time following each talk. “What really humble-ises astronomers is how much we really don’t know,” she said.

Apart from visiting The Dish of course, the thousands of visitors also visited art and light displays around town, and took selfies with Jaffa the orange astronaut in Cooke Park.