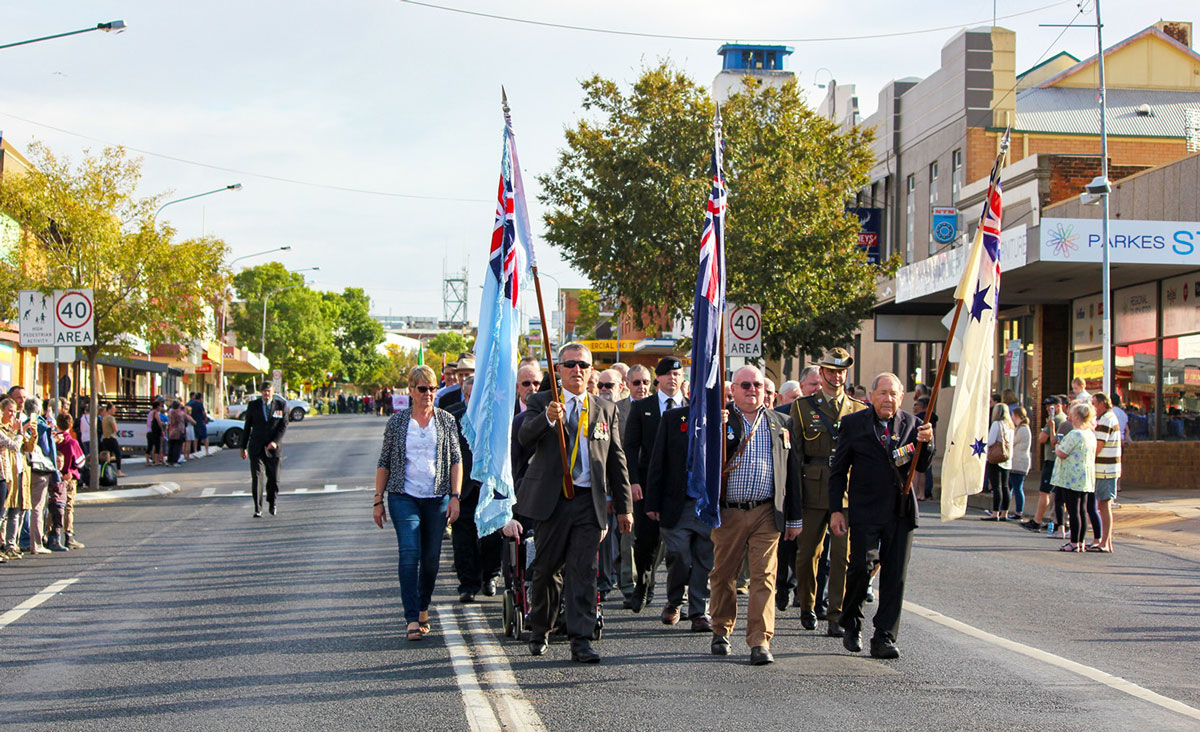 An Anzac Day March down the main street of Parkes.

This year’s Anzac Day celebrations in Parkes might turn out to be one of the biggest ever with many Parkes Elvis Festival visitors asking to be part of the day.

The Elvis Festival ends on Sunday, the day before Anzac Day and the Parkes Sub Branch secretary Paul Thomas said: “We have received a lot of requests from visitors who wish to participate in the March and other festivities.”

He said the traditional selling of badges and memorabilia in the main street leading up to Anzac Day would not take place, but instead the Sub Branch would be setting up a stall in Cooke Park to sell its memorabilia and Anzac Biscuits.

The special guest of honour on the day is Major General J. Paul Stevens AO (Rtd)., and state member Phil Donato MP will also be in attendance.

In Parkes the Anzac Day celebrations will commence with the Dawn Service at 5:30am at Memorial Hill.

Parking at Memorial Hill is limited to Returned Service personnel and holders of In- Capacitated Entitlement Cards.

Parkes Services Club will host a free breakfast at 6:30am for personnel with tickets, while both the Anglican and Catholic churches will conduct special Anzac Day services at 7:30am.

The traditional Anzac Day March starts at 8:20 in front of the Parkes Services Club and it is anticipated that Major General Paul Stevens AO will receive the Salute during the march.

The Mayor of Parkes Ken Keith OAM will commence proceedings at the Commemorative Service with the official welcome. The Parkes Shire Concert Band will provide entertainment and they will support the Parkes Christian School choir.

The captains of the Parkes East Public School Patrick McPherson and Kasey Morgan and Parkes High Schools Captains Charlie Denham-Lowe and Amanda Lowe will do the Address by Modern Youth.

At approximately 10:45am a Wreath Laying Pilgrimage to the Parkes Cemetery War Graves Section will take place.

Concluding the day’s activities will be the sounding of Retreat at the Cooke Park Cenotaph at 5pm.

Anzac Day celebrations in the rest of the Parkes Shire:

This year’s Anzac Day national service will once again be held at the Australian War Memorial and broadcast nationally.

Australians are encouraged to stand up this Anzac Day to honour all service personnel, past and present. How you honour and remember those who are serving and those who have served is up to you. Take time to reflect on Anzac Day in a way that means the most to you.