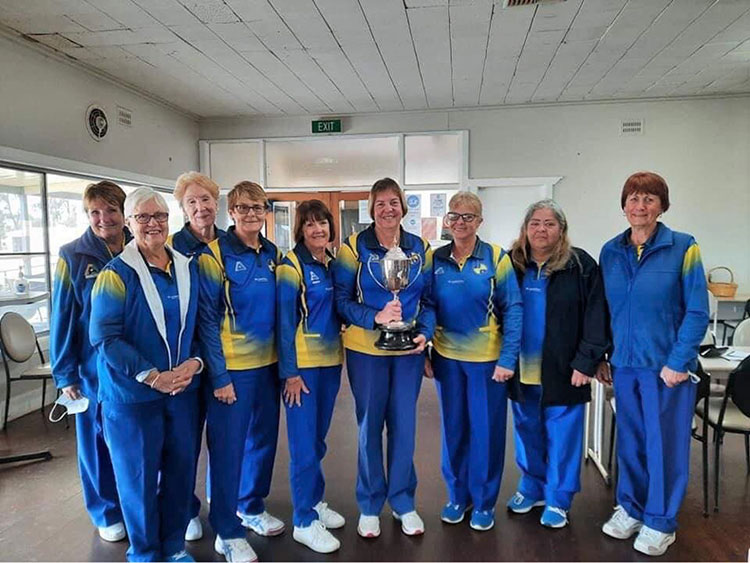 The triumphant teams of triples back from Condobolin with the Jones Challenge Trophy.

Three teams of triples travelled to Condobolin to contest the Jones Challenge Trophy. The teams had two wins and a draw on a miserably cold day to bring the trophy back to the Parkes Bowling Club. Forbes will now challenge the Parkes Club for the trophy in the next few weeks.

A bit of Aussie slang echoed around the greens on Tuesday as 20 true blue women went out to play bowls in wind that would blow a dog off his chain!

With a ‘no worries mate’ attitude, Brenda Davies and Laurie Keane defeated Lorraine Baker and Valmai Wescott in a close game of pairs.

A cry of ‘have a go you mug’ saw Kim Evans and Eileen Bradly come out on top in another close game of pairs against Hil-da McPherson and Kate Keogh (welcome back Kate).

Rhona Went, Chris Curteis and Marja Iffland played Joan Simpson, Carol Reed and Gwenda Carty in a game of triples, even though Joan put grippo on both hands it wasn’t enough to win a ripsnorter of a game.

Fran Dixon, Heather Harvey and Julie Green went walkabout to let Maureen Miller, Jan McPhee and Di Howell take advantage and prove to be too strong on the day.

A reminder that the club 4s close next Tuesday, 17th August. The 24th of August will be a big day with trading table (anything floral theme) and Rhona has generously offered to make soup which all bowlers will be able to buy for lunch on the day. Money raised will be going to the Pennant teams competing at state in October. To play social bowls on Tuesday please ring 6862 1446, between 9 and 9:30am.