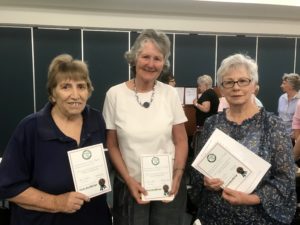 The bridge tables at the Parkes Leagues Club were filled with serious players on Tuesday as partners vied to win the Australia-wide Restricted Pairs.

The Pairs is one of three major annual events on the bridge calendar, bringing thousands of players from around the
country together, at their separate venues, to play the same boards of set hands.

The Parkes Club welcomed players from Condobolin and Forbes to make up eight and a half tables. The mood was lighthearted but the play was serious under the watchful eye of director Keith Fiedler.

The top ranked pairs for the Parkes contingent were Louise Payne and Denise Skinn for north-south and Beryl Twardy and Dawn Phipps for east-west. They hope to remain near the top of the field when the results came through for the rest of the country. The top five pairs nationwide will be awarded Australia-wide pens engraved with their names.

Each player was given a souvenir booklet advising the best bids and methods of play. In the game of bridge even the losers can be rewarded for specific achievements, such as bidding and making a tricky game.