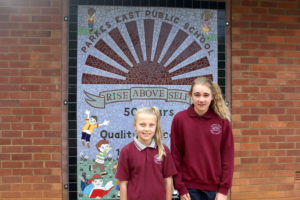 Two Parkes East Public School students have made their own Anzac history in the annual Riverina Anzac Writing Awards.

Year 5 student Brienna Brown was the Northern district winner with her lyrical poem about the soldier’s experience, utilizing the recurring motif of a field of poppies to create a sense of futility and loss.

“We have to remember them because they died for our country,” Brienna said.

The Northern district’s Highly Commend- ed award went to Year 6 student Madeline Blackstock for her short story that tackles a different aspect of war-time sacrifice. Made- line tells the story of a nurse stationed over- seas to tend the wounded, seen through the eyes of a child left behind on the farm.

“It’s important to remember the Anzac’s because there’s no war in Australia anymore,” Madeline said.

The Federal Member for Riverina Michael McCormack received almost 800 entries for the annual competition, with students across the electorate exploring the theme Anzac Day in the Riverina and Central West.

Michael said judging this year’s competition was tough. “I was not only impressed with the quantity of entries, but also extremely proud of their quality.”

Parkes East Public School teacher Leanne Matthews coordinated the school’s entries for the competition. “We’re all extremely proud of the girls,” she said.

“The information pack that the Minister sent out was very stimulating and managed to spark their interest, ” she said. “All the students really responded to the resources.”