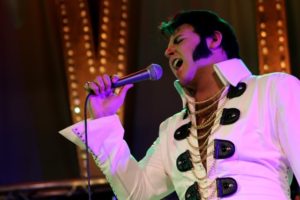 Jack Gatto, winner of the Parkes preliminary round of the Ultimate Elvis Tribute Artist Contest, competed in Memphis, US last week for his chance to be crowned the world’s best Elvis tribute artist. Jack represented the Parkes Elvis Festival and competed against 19 other semifinalists from all over the world.

Unfortunately Jack did not make it to the final round, which saw Dwight Icenhower winning the title. He represented the Branson Elvis Festival and received a contract to perform with Legends in Concert, “Elvis Presley – The Album Collection” 60-CD Box Set and a cash prize of US$20, 000. Jack is from Victoria, Australia and started
listening to Elvis because his father played Elvis music around the house. Jack believes it’s important to keep his tribute respectful and entertaining. It is a dream come true to be considered one of the top Elvis Tribute Artists in the world. His favorite Elvis song is “We Can Make the Morning.” Jack won the inaugural Parkes preliminary round of the Ultimate Elvis Tribute Artist Contest in January, where 17 contestants from Australia and New Zealand performed backed by the dynamic eightpiece Elvis In Concert band.

Parkes Elvis Festival Director, Cathy Treasure, said: “We’re excited for Jack and happy that he represented Parkes Elvis Festival in Memphis. This will strengthen the Festival’s US connection and further raise our profile on the International stage.” The worldwide annual search for the Ultimate Elvis Tribute Artist began in 2007 when Elvis Presley Enterprises Inc. announced they were looking for the “best representation of the legacy of Elvis Presley”. Registrations will open soon for the 2017 Parkes preliminary round of the Ultimate Elvis Tribute Artist Contest to be held on 13th January and 14th January at the Parkes Leagues Club. For further details go to www.parkeselvisfestival.com.au.