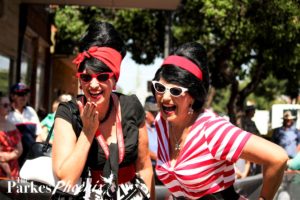 Parkes was literally shaken up for the 2019 Elvis Festival with several records tumbling as the event keeps on growing in popularity. A record-breaking 27,000 fans descended on our town in early January to celebrate the All Shook Up theme, while 11,000 people lined the streets to watch the ever popular Northparkes Mines Street Parade boasting 182 entries.

With more than 200 events on offer, and almost non-stop free entertainment on the Cooke Park main stage and top quality buskers in Clarinda Street, the notes of the King’s evergreen songs echoed to every corner of our town.

By Sunday one resident was convinced her chooks were cackling to the rhythm of ‘Return to Sender’!

It was not only the international performers, like feature artist Ted Torres Martin, who filled venues to capacity. Local group Amitie amassed a huge following, while Parkes’ young dancers showed the way with the Parkes Boppers and Twinkle Toes dancers rock ‘n rolling all over town.

Talented local musician Mick Green featured in the band for the All Shook Up Special opening night show sharing the stage with Lance Lipinsky and other artists. Peak Hill’s Erin O’Leary was crowned Miss Priscilla and won over the crowds with her bubbly personality.

The festival’s hard working and friendly volunteers, and Parkes Shire Council’s staff also flew the flag for Parkes ensuring everything ran smoothly and the masses went home with only praise on their lips.

Dressing up has become a vital element of the Parkes Elvis Festival that adds to its vibrancy and colour. Some local businesses had to put in emergency orders to ensure enough stock for the high demand for 50’s fashion trends.
And next year from 8 – 12 January, the costumes promise to be even more fun with the theme the 1966 American musical film Frankie and Johnny!