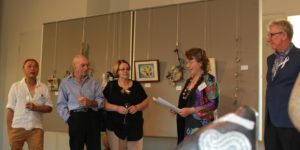 Local art-lovers got all fired-up for the Parkes Potters’ Group exhibition at the Parkes Shire Library’s Coventry Room last Friday. Cr Bill Jayett formally opened the exhibition, saying that while Parkes prides itself on our unique attractions – the Dish and Elvis Festival – the town’s real treasure is the arts. Bev Rowe, president of the Parkes
Potters Group said that for a small geographical area, there is a diverse output of artisans.

Lynn and Wayne Rogers were among the dozens of guests appreciating the art. “It’s a real credit to Parkes to put on a display of this calibre,” Lynn said. The work on display wasn’t simply traditional thrown pots and plates, but a selection of sculptural and functional pieces that utilized a fascinating range of styles and techniques. It was the third exhibition for the group this year, with 11 of the 14 members displaying their craft. Bev’s work included meditative wallmounted masks that incorporated religious themes, whereas Pol Cruz displayed a range of abstract art pieces, many of which positioned the human form amidst an almost surreal, dream-like arrangement of shapes and elements.

Other artists made more figurative pieces – the ram was a crowd favourite, and the Coventry Room became an honorary aviary with dozens of beautifully crafted pottery birds perched on various plynths. Bev drew attention to the two works, which were isolated in glass domes to highlight the skill involved in their crafting. Under one glass dome was a flawless Raku Pitcher made by Judy Kinsella, the other was a piece by the late Jan Hunter, who had passed away during the week.

“She was a great talent, and will be sorely missed,” Bev said. It was a delightfully arty soiree, with nibblies provided, along with a selection of locally produced wines by Twisted River.