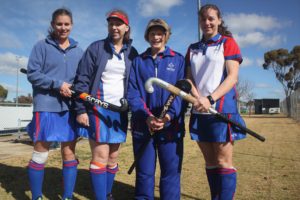 Parkes and hockey almost became synonyms last weekend at the Women’s Masters Southern State Hockey Championships. Bringing 61 teams with over 1,000 players to town, it was time for Parkes to shine. And sparkle we did – not only was the event hailed as a huge success, two teams were crowned as state champions, and it was a
very special occasion for a Parkes mum and her three daughters.

Parkes 1 became state champions for a third consecutive year after defeating Newcastle 1-0 in the final on Sunday afternoon. Parkes 3 was named joint champions with Goulburn 2 after a 0-0 draw in the final. For Fran Dixon and her three daughters, Kylie Butler, Deanna Dollery and Tracy Hambridge it was a very special occasion. All four played for Parkes 2 for the second year at the tournament. “This year is more special because it is at home,” said Fran.

The three daughters had travelled from Port Macquarie, Orange and Canberra respectively to play with Mum. “It is a fantastic opportunity for us to do this,” said Kylie Fran said although the state tournaments were usually very competitive, she loved the camaraderie and meeting up with friends every year. “It is also great to see all the junior girls I used to coach now playing in this tournament.

With another milestone coming up next year when she turns 70, Fran was not daunted by the fact she had to play six games over the three days of the tournament.