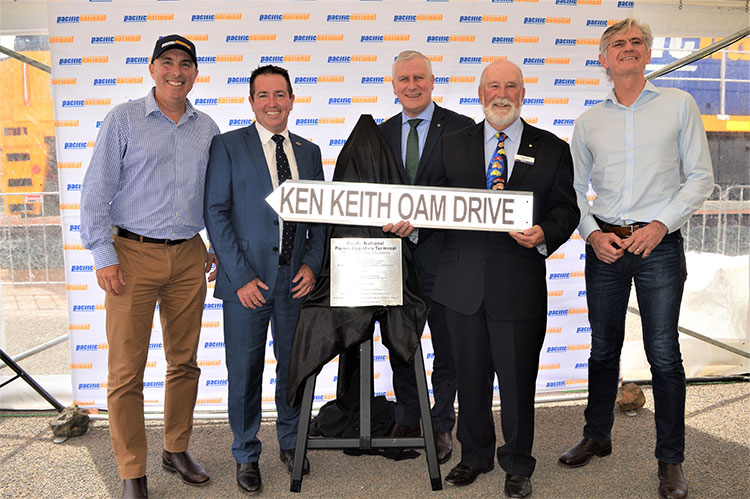 The largest logistics terminal in NSW will not only enhance productivity for Inland Rail, but will also bring an additional 90 jobs based at the terminal.

Deputy Prime Minister and Minister for Infrastructure, Transport and Regional Development Michael McCormack said at the opening: “This is a game-changer for Australian freight.”

“Construction started on the Parkes to Narromine leg of Inland Rail almost one year ago and has already proven a boom for local small businesses while creating al- most 900 new jobs, 370 of which are local people.”

The 365-hectare terminal site was still a sheep paddock only a year ago belonging to Parkes Mayor Ken Keith.

“It is a privilege to see how this paddock, that my grandfather bought 97 years ago, has developed,” said Ken. “I think my forebears would be delighted to see what has been built on the land they had bought. The Sydney to Perth line runs through the bottom part of our land, and Inland Rail on the eastern side.”

Ken said it was a nostalgic day for him as he had to step back during the development of the project, and congratulated the team at Parkes Shire Council for doing a sensational job.

The day turned more special for the Mayor when Pacific National CEO Dean Dalla Valle handed him a sign saying the entrance road to the terminal would be called Ken Keith OAM Drive. “It is only fitting to recognise Ken’s long work over 30 years,” said Dean.

The Parkes Logistics Terminal will be moving 50,000 shipping containers of freight from the terminal this year, going up to 100,000 next year and eventually 450,000.