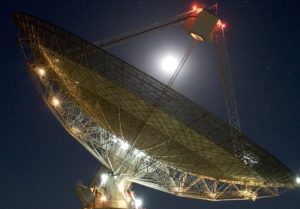 The CSIRO Parkes radio telescope has made its first observation on Tuesday morning in its search for intelligent life beyond Earth. Parkes is part of Breakthrough Listen, the 10-year, $100-million project launched in 2015 by internet entrepreneur Yuri Milner and Stephen Hawking, and started observations last month. The Dish has joined two US telescopes, the Green Bank Telescope in West Virginia and the Automated Planet Finder at Lick Observatory in California, in their ongoing surveys to determine whether civilisations exist elsewhere.

Yuri Milner said the addition of Parkes was an important milestone. “These major instruments are the ears of planet Earth, and now they are listening for signs of other civilisations,” Yuri said. After 14 days of commissioning and test observations, first light for Breakthrough Listen at Parkes was achieved on Tuesday with an observation of the newly discovered Earth-size planet orbiting the nearest star to our Sun, Proxima Centauri. A red dwarf star 4.3 light years from Earth, Proxima Centauri is known to have a planet, Proxima b, orbiting within its habitable zone, the region where water could exist in liquid form on the planet’s surface.

Dr Andrew Siemion, Director of Berkeley SETI Research Center and leader of the Breakthrough Listen science program, said the chances of any particular planet hosting intelligent life-forms are probably minuscule. “But once we knew there was a planet right next door, we had to ask the question, and it was a fitting first observation for Parkes,” he said. “To find a civilisation just 4.2 light years away would change everything.” The Parkes radio telescope is perfectly positioned to observe parts of the sky that can’t be seen from the northern hemisphere, including the centre of our own Milky Way galaxy, large swaths of the Galactic plane, and numerous other galaxies in the nearby Universe.

Dr Douglas Bock, Director of CSIRO Astronomy and Space Science, said the Parkes telescope was one of the most
highly cited radio telescopes in the world. Swinburne University of Technology is working closely with Berkeley and CSIRO to design and implement a signal-processing and data-storage system for the project that will make the Breakthrough Listen data available to the science community. Professor Matthew Bailes of Swinburne University, and the Breakthrough Listen project’s Australian science coordinator, said Breakthrough Listen would do more than just hunt for ET.

“The detection system will be simultaneously searching for naturally occurring phenomena such as pulsars and fast radio bursts, which are a large part of Parkes’ present work.” He said the Australian science community welcomed the opportunity to share the Breakthrough Listen data for other ongoing research projects.