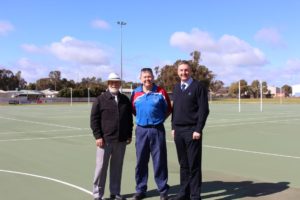 Parkes Shire Council have partnered with the Parkes and District Netball Association to deliver world class netball courts for McGlynn Park. Eight sealed netball courts will be resurfaced and remarked to bring them up to the recommended netball standards.

Parkes Shire Council Director Works and Services, Ben Howard, said: “With Parkes beginning to emerge as a premier sporting hub, these upgrades are necessary to deliver optimal playing surfaces and improved safety outcomes for the current user groups, and enable larger netball competitions to be hosted in town.”

Specialist surfacing company, Court Craft will repair the existing cracks and apply three coats of a non-slip, colour treatment over the existing asphalt to produce a shock absorbent, all-weather playing surface. Council contributed $64,490 towards the project under the Parkes Town Improvement Vote, with $4,100 delivered under the Northparkes Sports Grants Program, and the remaining $30,900 funded by Parkes and District Netball Association.
Parkes and District Netball Association has 300 registered players. The courts are used for the Senior Women’s and Mixed Tuesday Night Competition, Saturday Morning Junior Competition, as well as regular weekly training by both local competition and representative players.