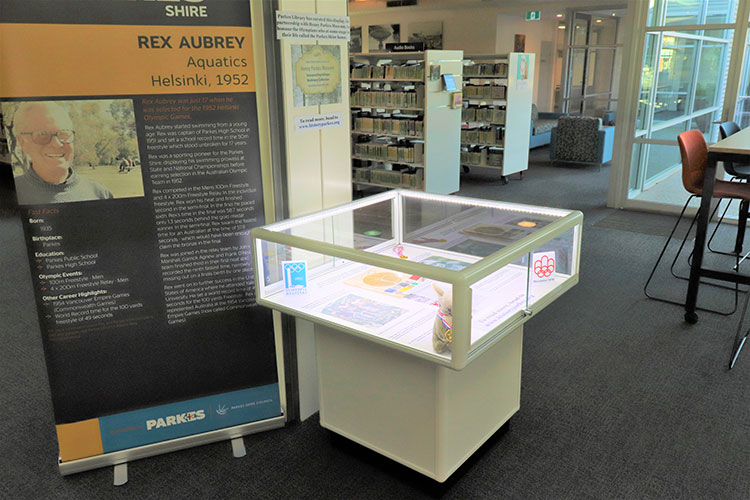 The “mushroom” display case in Parkes Library, featuring the first two of the eight Olympians of the Parkes Shire, with the special banner of Rex Aubrey made in 2016.

The Tokyo Olympic Games start in three weeks’ time and in the lead up to and during the Games, the Parkes Library will put the spotlight on our town’s eight Olympians with a special display.

Each fortnight two Olympians will be featured starting with Rex Aubrey and Nira Windeatt (née Stove). Both were swimmers, with Parkes’s very first Olympian, Rex Aubrey, competing in the 1952 Helsinki Games, while our first female Olympian, Nira Stove, took part in the 1976 Montreal Games.

The displays will feature images, information and items that relate to each of the eight Parkes Shire Olympians, including the amazing banners made in 2016 prior to the Rio de Janeiro Olympic Games.

The other Olympians to be featured are Ted McGlynn and Jim Bailey, who both competed in athletics at the 1956 Mel-bourne Olympics; Stephen Davies, who played for the Kookaburras at the Barcelona 1992, Atlanta 1996 and Sydney 2000 Olympic Games; Peter McMahon competed at the Beijing 2008 Olympics in equestrian; and Mariah Williams and Scott Westcott who competed in Rio de Janeiro in hockey and the marathon respectively.

Some of the items on display are on loan from the Henry Parkes Museum and Parkes Visitor Information Centre. Information and images are from Parkes Library’s history blog www.historyparkes.org