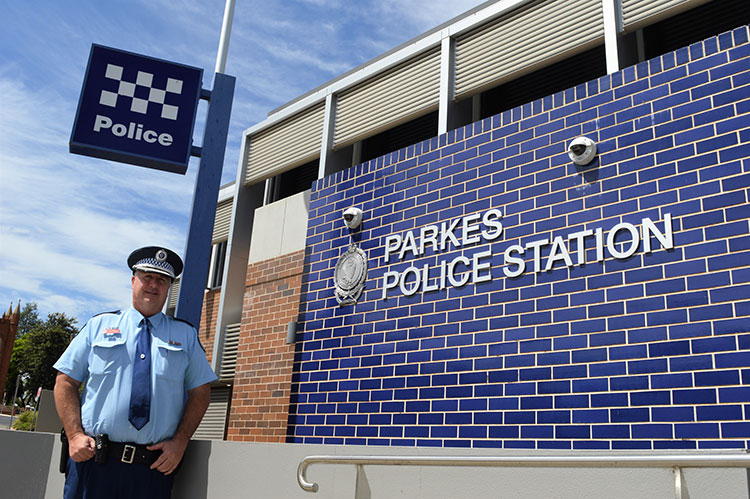 IMAGE: COMMUNITY CONNECTION… Chief Inspector Scott Rayner has been in the job for about six months and is working hard at making the police more visible in the community.

Parkes is a safe town and crime is generally on the decline. This is the opinion of the new police chief after about six months in the job.

Chief Inspector Scott Rayner told The Parkes Phoenix in an interview he had no concerns allowing his children to go anywhere by themselves as he considered Parkes to be safe.

This does not mean Parkes is completely crime free, but compared to other towns in the district he said crime was certainly falling. “This is as a result of implementing strategies to reverse incidences of crime. This does not mean we can rest on our laurels as we constantly have to adapt to the circumstances of the time.”

He mentioned an example from September last year when there was a spike in stealing from vehicles and breaking into homes at a particular location in Parkes. “We had an overt and covert operation to tackle the problem, as well as a lot of communication with people in the area and this resulted in arrests, significant charges and the incarceration of the offenders.”

“We are not waiting for something to happen, but aim to be out there to prevent criminal activity,” said the Chief Inspector.

Scott sees his appointment as Chief Inspector in August last year as going the full circle as he is no stranger to Parkes.

He first transferred here in late 2008 as duty officer and stayed in the position for a number of years. He has spent most of his working life in the Central West and when the position came up last year, he felt it was a good fit.

In his role as Chief Inspector, he would really like to improve the visibility of the police in the community. “We need to be out there driving and walking around and talking to members of the public. People should feel comfortable to approach the police. That is why we attend events, walk down the main street to try and break down barriers and establish open communication with the community.”

According to Scott crimes are subject to spikes, but during the second half of February and in early March there have been several incidences of stealing form motor vehicles in Parkes. “We’ve made a series of arrests and recovered some stolen property in relation to the February spike. The offenders have been seen on CCTV from Council and from homes, to be going from house to house and trying door handles until they find one that is unlocked.

“This is where we ask the community to help us by making sure to lock their cars and not to leave anything valuable obviously visible in the car.”

He said while drug crimes were not a significant problem in Parkes, there were a number of operations being targeted by the police currently. “People often want quick results, but these operations take a lot of planning, time and resources to makes sure we get the best evidence to put before the court.”

In general the Chief Inspector would like to encourage community members to keep an eye out for their neighbours as a neighbourhood watch program is not run in all areas. “We’re not asking people to do our job, but being a good citizen means looking out for your neighbour and showing some general care for those living next to you.”