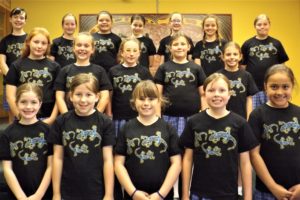 Performing in the Sydney Opera House must be the pinnacle for many artists, but to get the opportunity when you are still a child trumps most people’s dreams. This special honour will be the privilege for 19 members of the Parkes Public School (PPS) choir on Tuesday when they will perform as part of a combined choir of 700 NSW primary students.

“We are all pretty excited,” said Colleen Leonard, the PPS teacher leading the choir. “For some of our members it will be their first time, while a few went last year as well when we also took part.”

The Festival of Choral Music is an annual showcase of NSW public school students in a combined choir at the Concert Hall of the Sydney Opera House. This concert is one of a series of four managed by the Arts Unit of the NSW Department of Education.

The PPS choir successfully auditioned for this event at the end of last year. They have been diligently practising at lunchtimes and before school to learn a repertoire of 12 songs, which were specially composed and arranged to sing as part of the combined choir with other students.

During the year the conductor for the concert John Benson visited the school to assist the students with their musical training. According to Colleen there will not be much time for sightseeing in Sydney as they will spend most of Tuesday in rehearsals.