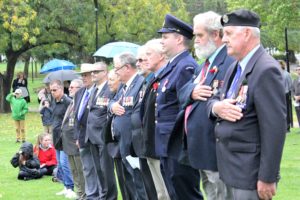 There was no rain on the parade as hun- dreds of Parkes residents turned out for the Anzac Day March on Tuesday. The Parkes Shire Concert Band led the procession. Ex- servicemen and women fell in behind, and a contingent of relatives, school students and community groups bolstered the parade in a show of support for the service men and women who have served our country.

Many braved the threat of rain to stay for the official civic commemoration service and wreath laying at the Cooke Park Cenotaph. Guest speaker Captain Anthony Klenthis of the Royal Australian Navy reminded the au- dience that Anzac Day honours the sacrifice of Australians in all wars. “This morning the last post sounds for them all,” he said.

“Standing together in the good times and the difficult times was a part of life for our service men and women, may we learn from them and make it an integral part of our lives also,” she said.

Parkes High School Captains Yasmin Potts’ and Ross Collins’ combined speech examined the Gallipoli campaign. They gave an emotive imagining of a young soldier’s perspective, noting that they were the same age as many of the soldiers who landed on those distant shores.

They spoke of the incomprehensible toll of war, and of the lessons learnt from the Anzacs.

“We feel the loss of war deep in our hearts and spend late nights wondering about what could’ve been with their lives, the potential they withheld,” Ross said.

“Stories of strength, determination, intel- ligence, compassion and Australian mate- ship still echo our walls today,” Yasmin said. “As the youth of today, we will strive to uphold the Anzac spirit.”