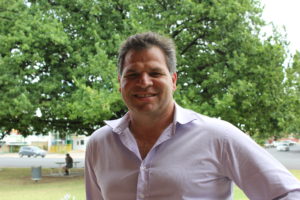 Parkes residents were invited to a barbecue by the new Member for Orange, Phil Donato, for a ‘meat’ and greet last Friday. It was his second visit in a week as he also made an appearance at the Elvis Festival dressed in his best white jumpsuit.

Phil is the first member of the Shooters, Fishers and Farmers Party to represent a lower house seat, which he won in a shock result in the recent by-election.

While he might be new to politics, his professional background will no doubt put him in good stead for his new role. With over two decades in the police force, and 16 years as a police prosecutor, the Millthorpe local has first-hand experience with a lot of the unique social issues that Central West faces. He is hoping his advocacy and communication skills will be an asset in the highly adversarial political environment.

Phil said his foray into politics was largely opportunistic. “I thought I had a lot to offer, so when my party decided to run a candidate I put my hand up,” he said.

While ultimately his goals are to hold the Government to account, his immediate plans are to get to know his constituents.

“The Orange by-election really sent a message to the Government that their policies were out of touch with their constituents.

“I’m keen to get out and connect with the local people, and find out what their concerns are. They’re really different in each community. Parkes are concerned about logistical issues, and moving ahead with the proposed transport hub.”