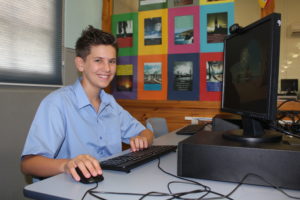 One Parkes High School student was spending lots of time with algorithms, informatics and coding for a week during the summer holiday, while the rest of the country’s school population was lazing on the beach or at the pool. Year 9 student Tynan Matthews was among 60 of Australia’s brightest technology buffs hand-picked to attend the very
first digIT ICT Summer School at the Macquarie University in Sydney last month. “It was good being around other kids with similar interests,” said Tynan. “I learned a few cool things.”

The program, which runs over six months includes two residential camps and a mentoring program, will help students to take their skills in all aspects of digital literacy, science, technology, engineering and mathematics to the next level. They explored all aspects of information and communication technology through guest lectures, interactive sessions, practicals and field trips. The visit to the Google Headquarters in Sydney impressed Tynan. “We were shown around the relaxation areas including craft and wood workshops, a virtual reality room, libraries, Lego rooms, cafés, restaurants and pop-up kitchens.

The 14-year-old from Parkes, the only student from the Central West to attend, was happy to make friends with students from other small towns in Australia he had never heard of. Over the next six months, Tynan will be
working on a project with another student and their mentor, which they will present at the winter school in June. “We still need to decide on our project,” said Tynan.

As for his future career plans, he hasn’t made up his mind yet. “I just want to keep on experimenting and learning for now.” And when Tynan is not experimenting or learning, he likes to play cricket and relax playing on his Xbox with online friends.