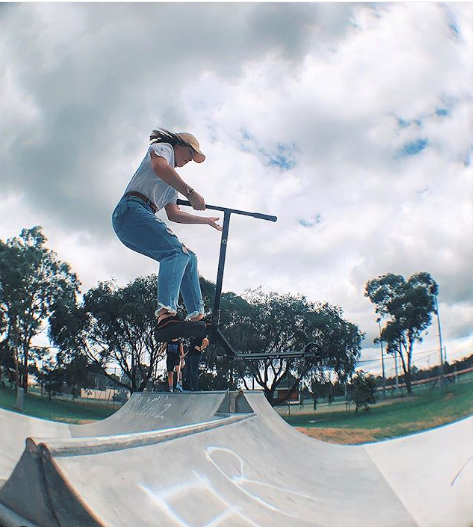 Not many girls are drawn to the adrenaline of the skate park, except for a trailblazing Parkes student who has just added a world ranking to her long list of achievements.

Seventeen-year-old Pascal Berry not only represented Australia at the first ever female competition in the World Roller Games held in Barcelona, Spain in August, but she ended in ninth position in the world ranking for female scooter riders.

Pascal, who is the number one female rider in NSW and the ACT, and number four in Australia, said she was so stoked to be part of this historic event. “It was awesome being part of getting the sport to a higher level.”

Pascal competed against 17 other riders from five countries saying the competition was very tough. The new indoor skate park built specifically for the event, had three sections that competitors had to hit. “The judges also looked at consistency, technicality and originality,” said Pascal. “We each had two 45 second runs.”

Looking ahead Pascal is excited for the new season that kicks off in Australia next month with a new sponsor, Tilt. She needs to take part in three of the five competitions across the country in order to get a ranking.

While her aim is to get better and bigger, she would also like to continue her encouragement of the sport among girls. “I would love to see more girls taking part in competitions. I enjoy teaching the younger kids new tricks.” Pascal said she just loved interacting with everyone at the skate park and helping them.

She will also work on her favourite trick the rotar whip, which involves spinning the bars and deck at the same time in different directions.

With her passion and drive, Pascal is not only heading for great things but sure to become a catalyst for the younger generation to follow in her scooter trails.