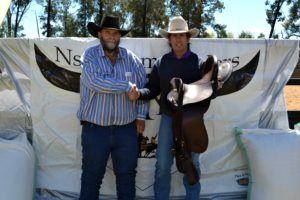 He was awarded a trophy saddle sponsored by Matthew Murray Riverina Saddlery worth $3,900. Pat has been riding for over 35 years and has been competing in the team yarding events for almost seven years. Team Yarding (or Team Penning) is a fastpaced event that gives a team of three riders on horseback 90 seconds to separate three specifically identified cattle from a mob of 21, and yarding them into a pen at the opposite end of the arena.