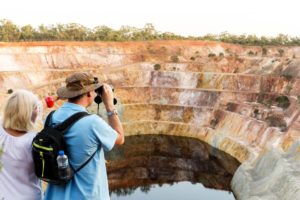 Peak Hill has been named one of Australia’s 50 Top Best Small Towns. The town with a heart of gold, 49km north of Parkes, made it to the list after a monthlong contest run by the online travel agency, Discount My Flights, to find the most irresistible, exotic, historic and postcard-worthy small towns in the country. “It’s a great honour to have Peak Hill recognised as one of the best small towns in the nation,” said Parkes Shire Mayor, Councillor Ken Keith.

“Peak Hill is a hidden gem, founded upon a rich history of gold mining. Now that the secret is out, we are proud to share Peak Hill with the rest of Australia,” said the Mayor. “It is not a surprise Peak Hill was selected.” With gold first discovered in 1889, it still attracts visitors to the town with the Gold Mine Open Cut Experience topping the list
of must see attractions.

Residents were very excited about the inclusion on the list saying it would give their town positive publicity. The town, with a population of around 1,400, also offers many other tourist attractions such as a unique nature walk, the
Bogan Weir, Australia’s first upright wheat silo, heritage listed hospital, arts and crafts, the Big Fish Fossil hut, and a unique street facade which takes you back in time.

The first public wheat silo built in Australia was constructed at Peak Hill in 1918 after government surveys found the district had great potential as a wheat producing region. The winning towns gain promotion through various media channels and a coveted badge for their website. Central NSW was well represented in the top 50, with Orange, Lithgow, Blayney, Dubbo and Narromine also making the list.