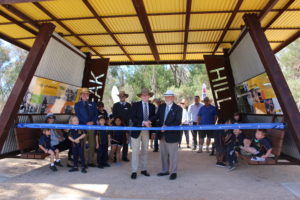 The Peak Hill Gold Mine has an extra sparkle with the official opening this week of new work and additions. NSW Minister for Tourism and Major Events Adam Marshall was in Peak Hill on Monday to open the works including the
new gold mining themed entry shelter and associated revitalisation works that was supported by the NSW Government.

“The Peak Hill Gold Mine is a key driver of the Peak Hill visitor economy and we’re proud to be supporting Parkes Shire Council’s efforts in revitalising the visitor experience at the mine through our Regional Visitor Economy Fund,” said the Minister.

Parkes Shire Council’s Destination Development Manager Kelly Hendry said the mine was “popular among travellers, particularly caravaners, wanderers and family groups”. “These improvements are designed to encourage
visitors to stay and explore longer, which is anticipated to have flow-on benefits to Peak Hill businesses”.

Major works undertaken include: design and construction of a bespoke Peak Hill Gold Mine entry shelter that looks like an old mining relic (poppet head); development of interpretive sculptures and soundpost to tell the mining story; revamped walking trails/track works, seating, signage and bollards; and a drinking water refill station.

A majority of the works have been carried out by local suppliers such as local Peak Hill fabrication company Zaidan Pty. Ltd. The Peak Hill Gold Mine lies on a current mining lease, and is one of only a handful of sites to have been granted a tourist mine permit. Tourist mines are workplaces previously used for mining operations that are now used only for tourism purposes.

Visitors can take self-guided tours of the site from 9am-4pm daily.