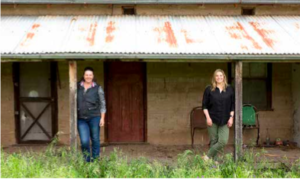 What does a farmer look like? Kim Storey and Cassie Gates are on a mission to answer that question. The Eugowra-based photographer and graphic designer are collaborating on a coffee-table book that will showcase a range of 21st century farmers.

The pair is travelling across the country to photograph primary producers for their project. “We’ve got about 25 so far, but we’ll have 100 by the time we’re finished,” photographer Kim Storey said.

They visit farms to capture beautiful por- traits of farmers and their produce, and will complement the images with their stories. “We give the farmers the opportunity to show what they do, why they do it, who they are, and where they are,” she said. “We’re opening the gate into their world and letting people in.”

“Anytime farming hits the media it’s for a negative reason. All of the newsworthy events, like floods or fires or droughts, only show the negatives. I wanted to show the positives.”

Kim said that the idea for the project sprouted from a twitter conversation dis- cussing the perception of women in agri- culture.

“When I googled what does a farmer look like all the images were old men in overalls holding pitchforks, and not rep- resentative of what farmers are and what they do.”

“I wanted to challenge the perception that people have of farming and show the real diversity in the industry; the range of backgrounds, industries, and technolo- gies.”

“I’d really wanted to do a photo book for a while, so we put the two together.”

The project has already received a lot of media attention, and they are currently working on the publishing strategy. They are tentatively hoping it will hit the shelves for Mothers’ Day next year.