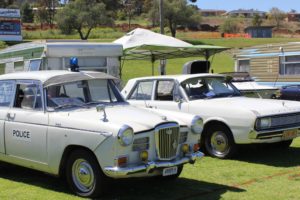 The Central West Car Club got plenty of engines revving at their Annual Show and Shine on Saturday. Almost 200 cars from all vintages were on display, with some coming from as far as Ipswich for the 12th annual charity event.
The impressive variety of motors in the show included vans, utes, hot-rods, motorcycles, vintage service vehicles, and even a lawn mower collection. Some attendees were impressed by the creatively restored panel vans on display,
which featured luxurious bar and bed options, a gaming room, or air-brushed murals on the panels.

Others were taken by the rare vintage cars that were in show-room quality, such as the 1915 Model T Ford owned by Brian and Alicia Day, or Simon Holland’s 1933 Plymouth Coupe, which is believed to be the only one in Australia.
Even with so many beautifully restored cars, the old rust-coated work-trucks won quite a few hearts.

Mick Beuzeville demonstrated his 1949 Orchard Crawler, a tidy little tractor that ploughs between trees, and his 1948 tractor that is started with a shot-gun cartridge. There were 55 trophies awarded for different categories. The Car of the Show was won by Rod Goodsell’s 1956 FE Holden, which also claimed the Aiden Ashcroft Memorial Award. Dwayne Boan’s 2012 Harley Davidson Fatboy won the Bike of the Show.

The real winner was CanAssist. Rodney Barnes, President of the Central West Car Club, said that once the finances are tallied up he expects they will donate in excess of $9,000 to the charity. Photos of event on page 10.