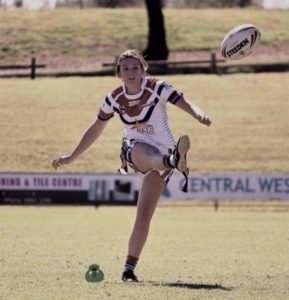 The 2017 Services Club Spacecats started the season on a high with a 56-0 win over the Narromine Jets on Sunday.

The Spacecats had a good pre-season build up with trials against Forbes and Dubbo Macquarie, as well as a positive showing at the Canowindra KO. With nine new players on the team, early combinations were important.

It was evident early that Parkes needed to control the ball to trouble the Jets’ de- fense. Rookies Tyannua Goolagong and India Draper combined within the first five minutes to produce a try for Draper, before Goolagong asserted herself on the game.

Scoring three tries and setting up count- less attacking raids, the young half was superb in helping Parkes score more than a point a minute in the first half. One of the features of the first half was a 70m try featuring an exchange of passes between 16-year-olds Emeline Lavaka, Alice Maier and Lauren Chester. The result was Chester posting one of her two tries for the match.

In the second half, a more determined Narromine emerged and troubled Parkes with determined play, however veteran players Sami Afele, Emma Bayley and Demi-Joyce Winter led a siege-mentality defense to stifle numerous Jets raids, and enable Parkes to keep Narromine to zero. Another rookie, Paige Hay totally controlled the second half, combining with skipper Claire Barber to push the final score to 56-0 and record a positive start to the new season.

Hay and Goolagong were judged by their peers as the players of the day, with the emerging Chester not far behind.