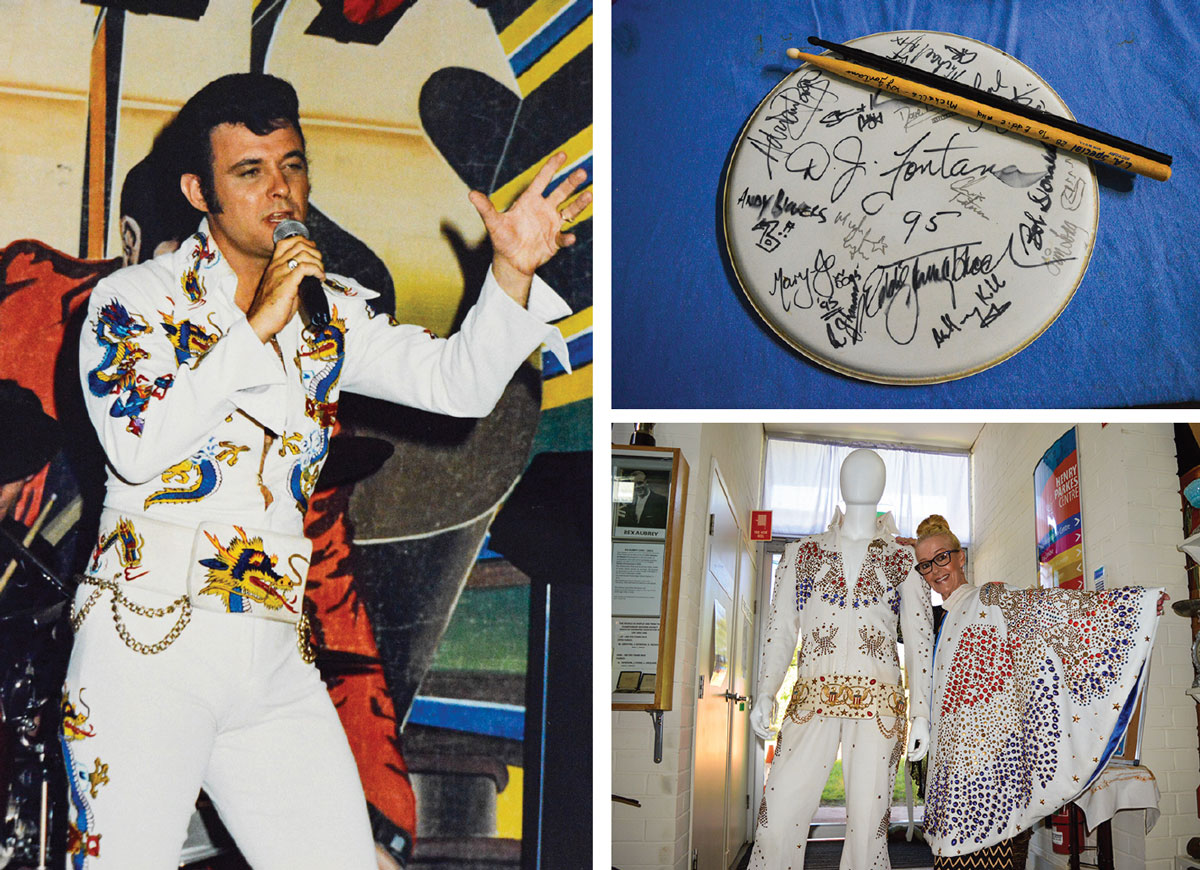 One of the photos of Eddie Youngblood that was donated to the museum; The drum skin and sticks signed by DJ Fontana, who was a drummer for Elvis, on display at the Henry Parkes Museum; Michelle Youngblood with the first eagle suit that was made for an Australian by Gene Doucette of B & K Enterprises Costume Co.

Eddie Youngblood, who suddenly passed away on 1st March 2021, returned for two more festivals and his dying wish was that his Elvis costume collection and items be donated to Parkes.

Last month Eddie’s partner of 34 years, singer and dancer Michelle Youngblood, arrived in Parkes with a car load of precious items. The collection includes the famous eagle suit. “Eddie was the very first Australian to have the eagle suit made for him by Gene Doucette of B & K Enterprises Costume Co,” said Michelle. She also donated his blue owl suit, which was specifically made for Eddie.

Another very precious item is a drum skin and drum sticks signed by DJ Fontana, who played the drums for Elvis for 14 years. DJ toured with Eddie for six weeks in Australia.

Eddie was born in the Victorian coastal town of Apollo Bay in 1956. After his family moved around Victoria for several years, they went to Townsville in Queensland. He got his first taste of showbiz when he entered a high school talent quest and won the audience prize of $10.

He served his apprenticeship in talent quests and went on to create a tribute show around the music of his idol, Elvis Presley. ‘The Golden Years of Elvis’ and ‘Idolz in Concert’ became massive hits in clubs and casinos around the country. Eddie was revered by his peers as one of the first and most successful tribute acts, long before the phenomena it became decades later.

Eddie was awarded ‘Best Variety Production Show’ for two consecutive years in the 1984 and 1985 MO Awards.

In 1983/4 he starred in the original Australian production of ‘Joseph and the Amazing Technicolour Dreamcoat’ in the role of Pharaoh with Angela Ayers and Daryl Cotton.

He became a regular performer on most Australian variety entertainment television show in the 80s and 90s. In 1991 he starred in the pre-game entertainment at the NRL Grand Final at the Sydney Football Stadium with a television audience of 45,000.

In 2003 Eddie took on the role of marketing and entertainment manager at Club Forster where he worked until his death. The auditorium at the club was renamed in honour of Eddie last year.

When asked about the secret of being a successful ETA, Eddie said: “I’ve always said it’s the passion, dedication, hard work and understanding that you are yourself not anyone else. It’s your heart, soul and respect of the music and the man that makes you sincere and genuine in the eyes of your audience.”