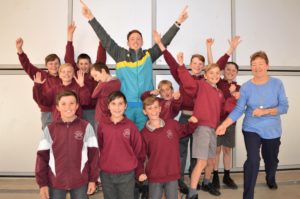 It was a fun and rewarding start to the week for students at Parkes East Public School when they received a visit from a NSW Premier’s Sporting Challenge Ambassador on Monday.

Ash Williams, goalkeeper for the Australian Under 21 hockey team from 2014 to 2016, spent time at the school  following a 10-week physical activity period when students had to participate and record their levels of physical activity.

In his talk to the whole school he focused on healthy eating and why it was important, as well as the lessons he has learned during his hockey career. He said determination and resilience were very important qualities for him in order to achieve his goals of playing for Australia at the Olympics and World Cup one day.

“Determination to keep on practising up to seven hours per day, every day, and resilience to carry on through lots of challenges. When we lost the semi-final of the 2016 Junior World Cup in front of 12,000 people with a shootout against India, I knew we had lost because I let in some goals. It was really hard, but with resilience and a good support network, you carry on and pursue your next goal.”

Ash said it was also important to love what you do. He started playing hockey at age 12. He first played soccer, but when he saw a hockey goalkeeper in action one day, he knew that was what he wanted to do.

The Parkes East students did not hold back when it came to shooting questions at Ash and asked anything from how long it took him to tie his shoes, what was the best part of hockey and whether he knew Parkes hockey stars Mariah Williams and Kurt Lovett.

Ash said Parkes East had been the best school he had visited so far. “I can’t believe how popular hockey is in Parkes. It is just everywhere.” Students who showed commitment during the Premier’s Sporting Challenge were called out to receive a certificate as an encouragement award from Ash. (See photos of students with their awards on our Facebook page.)