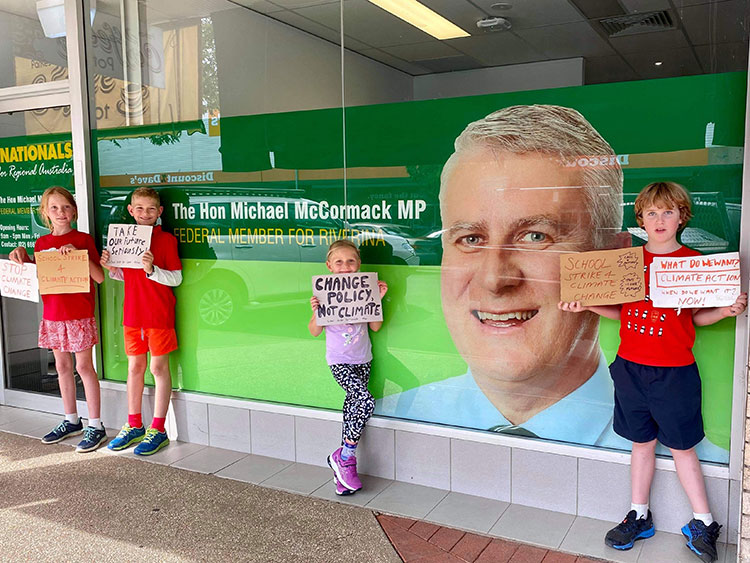 WHAT DO WE WANT?… The young protesters outside the Parkes office of the member for Riverina and Deputy Prime Minister Michael McCormack last Friday. They are Ebony Bland, Oscar Hendry (organiser), Gloria Hendry and Alexander Priest. They were also joined by Jacob Gosper, Oscar Gosper, Mary Gray and Harvey Gray.

A nine-year-old Parkes student feels so strongly about climate change that he took the initiative to organise the very first local climate change protest last Friday.

“I just wanted to do something about climate change because it doesn’t feel right just standing by and letting it happen,” said Oscar who was inspired by a story on BTN (Behind The News). “There was a segment about climate change and a group of Australian teenagers trying to sue the government for approving the expansion of a mega coal mine.”

Oscar said after some research he found protests were planned around the world on Friday, 19th March for School Strike for Climate Action, the movement inspired by Greta Thunberg from Sweden. As nothing was planned for Parkes, he decided to organise his own protest.

“I really hope Michael McCormack heard about our protest and watched the video to hear our messages as the kids here in Parkes care so much about this,” said Oscar. 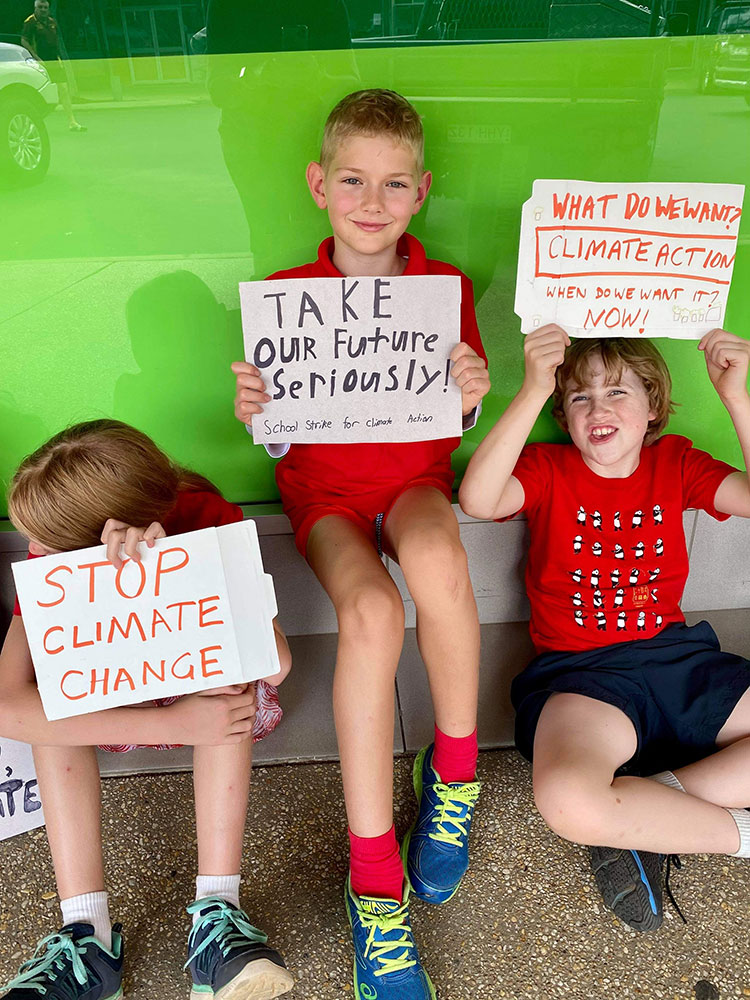 Ebony Bland, Oscar Hendry and Alexander Priest with their placards. Oscar has never taken part in a protest before, but is keen to organise another one.

He is very concerned that with everything happening in the world, many people including the government, are not doing much about it. “Right here in Parkes we have felt the impacts of climate change, such as the bad drought and the super cell storm earlier this year. I believe it is from climate change because as the atmosphere is getting hotter, it creates a better climate for these types of storms causing a lot more destruction.

“This means the government has to spend a lot of money on repairs from climate change impacted weather events, which leaves less money for them to spend on actually trying to fix climate change!”

His message to the leaders is that they should be doing more. “I want them to take the future of the human race more seriously instead of focusing just on money. It would be nice for politicians to agree instead of arguing about it and make a serious plan to fix it.”

Oscar said he did not have much time to organise the protest and was very happy with the turnout and the message they managed to get out into the community. “Lots of adults walked past and I was inspired by the support and encouragement that they gave us all.”

This has motivated him to organise an-other protest soon, and he has other ideas to raise money and awareness about climate change.

When he is not organising protests and doing climate research, he picks up rubbish at his school, and encourages his friends, family and teachers to reduce, reuse and recycle.