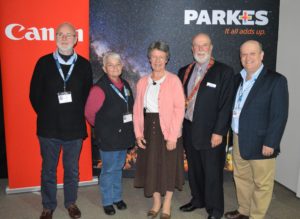 The discovery of pulsars was announced fifty years ago and it has since become a major field of astronomical research, especially at the CSIRO Parkes Radio Telescope. As the Parkes telescope has discovered more pulsars than every other radio telescope in the world, combined it was only fitting that the keynote speaker at the 15th annual CWAS AstroFest last weekend was the discoverer of pulsars.

Dame Jocelyn Bell-Burnell said she was very excited to visit the Parkes Radio Telescope for the first time. “It is one of the major cutting edge telescopes in the world doing very important work.”

It was whilst spending endless hours analysing reams of paper chart recordings as a young research assistant at Cambridge University in 1967, where Jocelyn was helping to build a large radio telescope, that she noticed what she referred to as ‘scruff’ in the recordings.

This scruff was a pulsating radio source which reappeared exactly one Earth rotation later every day making it unmistakably a sign of a celestial object. Jocelyn had discovered a rapidly spinning neutron star, later termed a pulsar.

The discovery, hailed as “one of the most significant scientific achievements of the 20th century”, was recognised by the award of the Nobel Prize in Physics to her thesis supervisor Antony Hewish. Another highlight of the AstroFest is the David Malin Awards for astrophotography presented by world-renowned astrophotographer, Dr David Malin, himself. This competition has become the premier event of its kind in Australia with 260 entries this year.

“Two categories had some of the best images I have ever seen,” said David at the prize giving ceremony. The overall winner was Luke Tscharke with his entry titled Crescent Moon at Lake Oberon entered in the Night Scapes category.

An array of international and local guest speakers filled up the programme for the rest of the event attended by over 100 people.