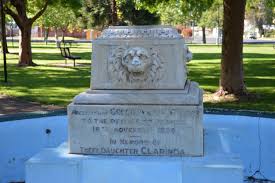 Baroness Gardner of Parkes is the only Australian woman to date who has been elevated to the peerage, and only the second life peer who has taken a name from a place outside the United Kingdom.

“It was a huge battle to get Parkes in her title and Trixie Gardner even had to get permission from the Queen,” said a representative of the Baroness who visited Parkes in January doing research for her autobiography to be published later this year.

The Baroness is the daughter of Greg and Rachael McGirr and was born in Parkes as one of nine children. Her sister is Clarinda who died at a young age and the fountain in Cooke Park was erected in her memory.

“The Baroness is very passionate about the Clarinda Fountain, and I am sad to report that it is not in a good state,” said the representative who preferred not to be named.

She said it would be wonderful if it could be restored to coincide with the launch of the autobiography, as the McGirr family was so important to the history of Parkes.

The family helped with the establishment of Memorial Hill and parts of Cooke Park.

“There is this wonderful dichotomy of history in Cooke Park with the new statue of Elvis on the one side and the Clarinda Fountain on the other. It would be great to have them match in stature with the fountain restored to its original state.”

The representative said if the Baroness, who turns 92 in July, was fit enough she might travel to Parkes to launch her autobiography here.

Trixie Gardner earned a Bachelor of Dental Surgery (BDS) in 1954 from the University of Sydney and moved to the UK in 1957. She was a councillor of Westminster City Council, Lady Mayoress (when her husband was Lord Mayor), in 1970 she stood for Parliament for the Conservative Party, and he was elected as a member of the Greater London Council (GLC).