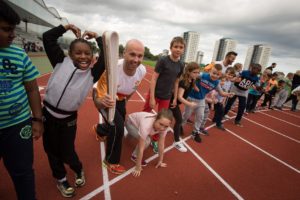 The Queen’s Baton Relay (QBR) will come through Parkes on Day 35 of the baton’s 100-day journey in Australia leading up to the Gold Coast 2018 Commonwealth Games.

After travelling an astonishing 288 days throughout the Commonwealth, the Queen’s Baton will arrive onto Australian soil in Brisbane on 24th December, having shared the dream of the 2018 Games with over one third of the world’s population.

The Queen’s Baton will scale Sydney Harbour Bridge, celebrate the Taste of Tasmania festival, be a part of the tennis action in Perth and Brisbane, hit the roads at the Tour Down Under in South Australia and respect the magic that is Uluru at sunset.

From 25th January 2018, the QBR will shift gears to a more traditional relay starting in Canberra, where the Queen’s Baton will join Australia Day celebrations, before continuing in the hands of approximately 3,800 batonbearers through every state and territory.

As the Queen’s Baton travels the length and breadth of Australia, it will not just pass through, but spend quality time in the communities it visits. The Queen’s Baton will arrive on the Gold Coast for the XXI Commonwealth Games
Opening Ceremony on 4th April 2018, where His Royal Highness The Prince of Wales will remove Her Majesty’s message and read it aloud to declare the Games officially open. Batonbearers will be informed of their street-specific slotting location in December.