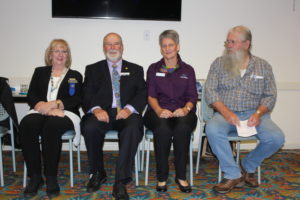 More than 30 Quotarians from Bathurst, Blackheath, Orange, Condobolin and Lithgow attended the program over two days at the Parkes Services Club.

The event was officially opened by Mayor Ken Keith. He welcomed the Vice-President of Quota International, Shelly Brown to Parkes and briefed the meeting on the latest developments in the shire.

He said the huge investment announced in the Federal budget for the Inland Rail Project was the best news Parkes had ever received. “There is huge potential with many benefits for the region. The prosperity it will bring makes it a well worth investment.”

The Mayor was very happy to boast about the Council’s initiative to make a short humorous video as a pitch to Amazon, that was posted online last week, to bring its investment centre to Parkes as a demonstration of the possibilities for new development the project could bring.

Shelly Brown attended the meeting to brief members on the latest information from the head office. She also handed a certificate to regional director, Lynne Hawley for her services.

Although Parkes will celebrate its 60th anniversary in September, the semi-formal dinner on Saturday night was a good time to cut a cake for the anniversary.

Quota International supports the deaf, hard of hearing, speech impaired and women and children in the local community and around the world.
By Maggi Barnard